It saddens me when expensive, well-built mechanical devices meet their end while they are still in good operating condition.  Now they are practically worthless.  I’ve held onto these for a decade or two, thinking the digital thing might be a fad, but in the latest, more determined closet cleanup, it was time to let them go to an artist who can repurpose the parts. I did keep the lenses, which can be used on new SLRs with an adapter.  Back in the early 80’s I saved up money, including one whole season of selling Christmas trees to buy a Canon- AE-1 SLR camera and lenses.  The camera was my companion on trips out west – to the Canadian and American Rockies, on adventures on the North Shore of Minnesota. 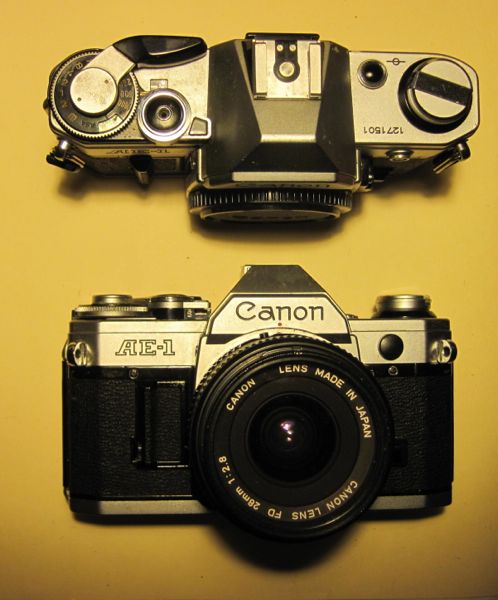 One of the most memorable was a trip to the top of Mount Timpanogos in Utah.  Timp is the 2nd highest peak in the Wasatch range, which is the range running north and south of Salt Lake City/Park City and contains Alta and Snowbird ski areas.  At any rate, I was young and adventurous and found myself on near the top of the mountain without any mountaineering gear – not even a shovel or hammer for self arrest.  The hike up was difficult, with parts in steep snow.

Some more experienced hikers with ropes, crampons and the like were in disbelief to meet us near the top.  In no uncertain words, they explained  our stupidity to us and explained we’d have a hard time going back the way we came without slipping and falling as going down a corny snow slope is harder than going up.  They said the best worst option for us was to slide down the Timp glacier instead of risking the ridge trail.  I don’t have any digital pictures from the day, but I found some at this website that shows the trail in the heat of summer.  Imagine the trail in those pictures mostly covered in snow at the higher elevations.

So, I bundled my day pack and camera in my lap and slid over the edge down the glacier.  At one point, my camera (in a case) and day pack separated from my body and while I was eventually able to stop, the pack and camera continued to gain speed down the glacier, bouncing higher and higher.  On the lower reaches of the snowfield, openings appeared in the snow where a creek ran down the middle of the valley.  My memory is that these holes were about 5 feet across and went down 10-15 feet to the roaring creek underneath. My camera bounced over at least two of these before stopping.  Miraculously, the camera still worked after the journey.

I just read the following on the Wikipedia entry on Timp that makes me even more frightened, 30 years after the fact:

“undercutting of deeply drifted snow by streams creates a hazard that has proven fatal on more than one occasion. Climbers can fall through the undermined snow fifty feet or more into the icy stream underneath.”

“The Timp Glacier is one of the major sources of injury or death to hikers on Timp, particularly when some attempt to “glissade” (or slide rapidly) down the snowfield’s surface with the assistance of a shovel or other device to save time descending. There have been many cases of injuries from buried rocks under the snow as well. There have been numerous life flight rescues on the mountain, often caused by this activity.”

This week’s Photo Friday Challenge is “Famous.”Â  Here are three of us on the Olympic medal podiums at Park City, Utah, part of the 2002 Salt Lake Winter Olympics. We’re not really famous outside of our own minds!