This week’s Photo Friday Contest theme is “Home.” Here is my entry. 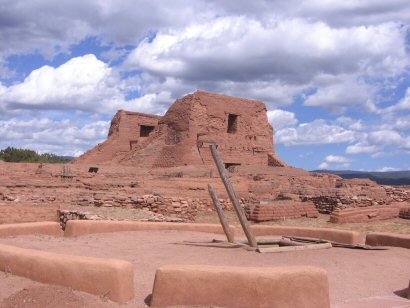 This is a nice juxtaposition of the ruins of a Spanish church and native kiva. This is at Pecos National Monument in Northern New Mexico.

I thought I’d put up a couple pictures of the small house or casita that we rented in Santa Fe, just south of the Capital. 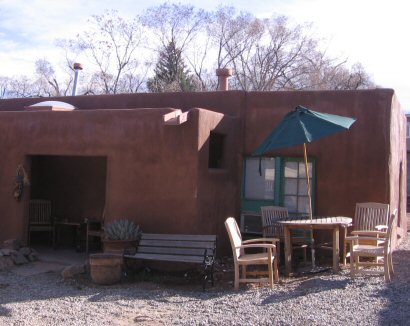 It’s a very “cozy” neighborhood – there’s a 5 way intersection about a block before the casita. The inside had a big room, kitchen, and bathroom. 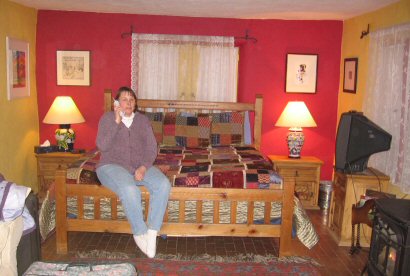 On the way home we stopped at Pecos Ruins, which was a very large settlement of upwards of 2,000 people in Pueblo days. 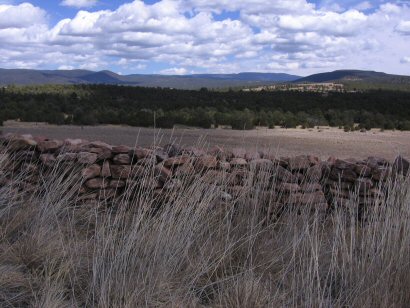 The settlement had a stone wall around it – it was a boundary as many visiting tribes would trade and camp in the meadow below and were not permitted to cross the wall after dark. 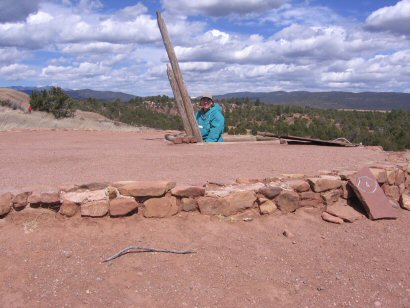 Like other ruins, this one had a number of kivas, or underground ceremonial spaces.

This photo shows a juxtaposition between the traditional and colonial. There is a kiva in the foreground and the ruins of a large Spanish mission church. The first missionaries built a church much larger than this one, converted the Indians and forbade their customary practice. A while later, there was a revolt and the church was destroyed and the colonizers kicked out. About 60 years later, the missionaries came back, built a smaller church and looked the other way at the traditional worship.

Today was a most excellent day under sunny skies. We drove to Bandelier National Monument, but on the way stopped at the White Rock overlook, which is between Santa Fe and Los Alamos and overlooks the Rio Grande. 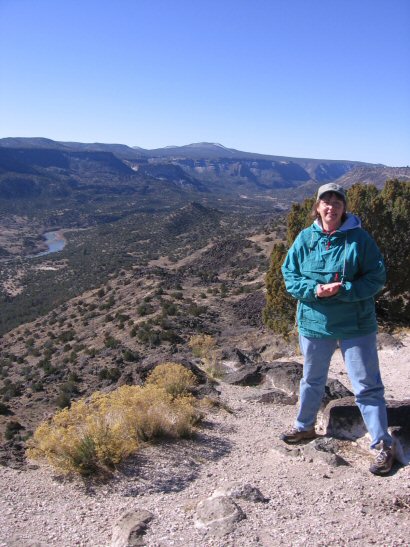 The park was lovely in the early morning – here’s Linda with a cup! 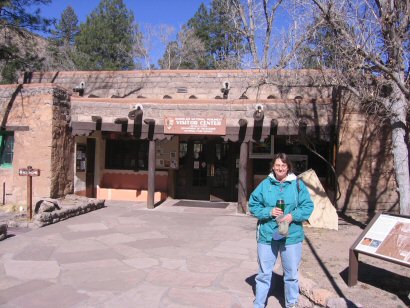 The building behind Linda and the courtyard you can’t see is one of the largest CCC building projects ever completed. Bandelier is home to many ruins dating back thousands of years.

This is a picture of the Tyuoni Pueblo which is very close, as are the other ruins in Bandelier to a small stream. You can still see the outlines of the rooms, which at one time had a roof and ladders going in the ceiling as an entrance. 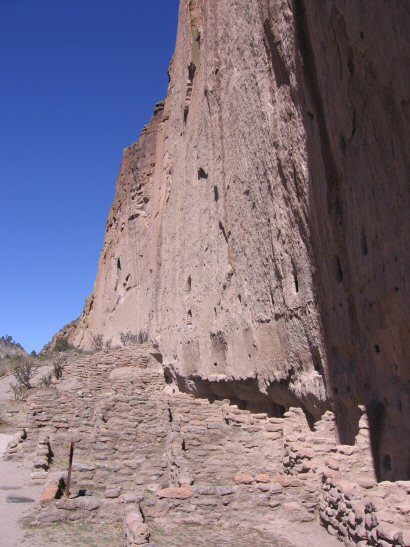 These ruins are along the cliff – some rooms are carved out of the cliff and others were built up with adobe blocks. This is called the Long House as you can see the ruins stretch along the cliff to the distance. 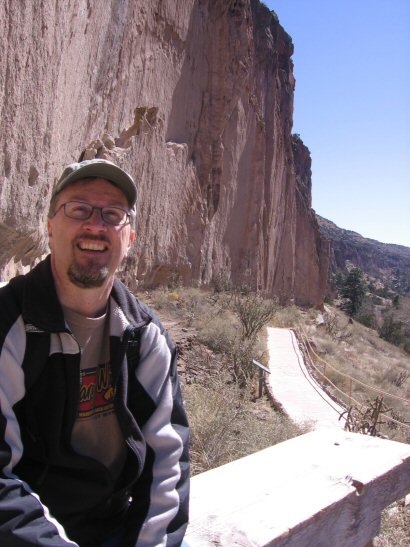 I forgot my hat, so had to get a new one. 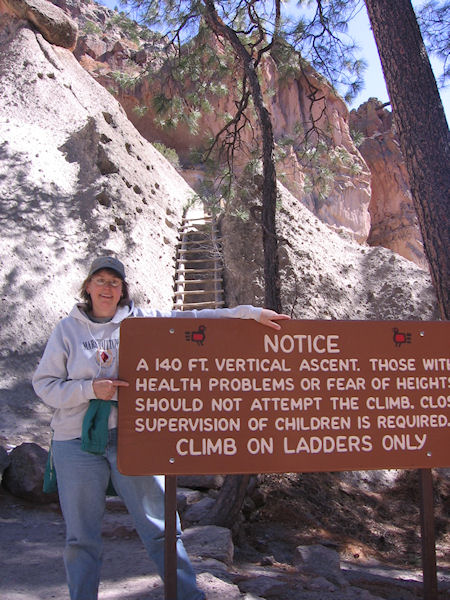 Linda is about to embark on the 140 foot ladder climb to a cliff dwelling. Our previous history at the Grand Canyon portend that this is an activity not to be taken lightly! 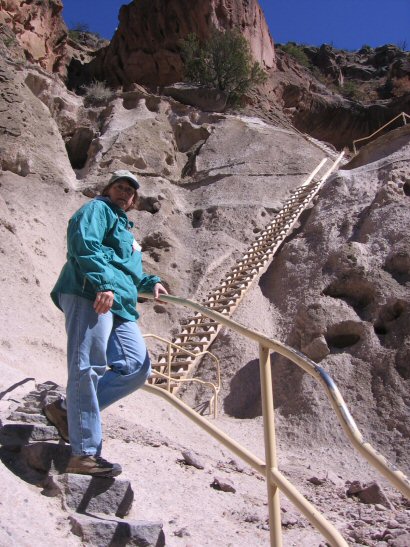 Just like a mountain goat, we scrambled up to the top. 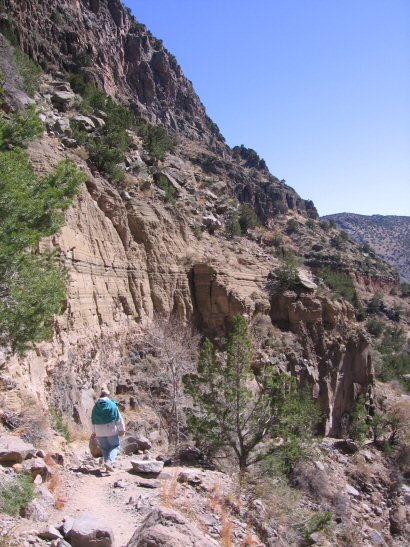 The last half of the day was a wonderful hike down geologic time and through botanical biomes. The hike was 2 1/2 miles down the canyon to the Rio Grande. The hike started in Ponderosa Pine forest and went down through sage, oaks, and finally to a flood plain. The geology was equally spectacular!

Today was nice than yesterday, but still chilly. We drove up to Taos on the high road and stopped in a Santuario de Chimaya, which is reputed to be the Lourdes of America. It is in this small village nestled on a hillside. There was a wonderful poem about it in the Palace of the Governors, so we wanted to see it. You can read about the legend by clicking the link. 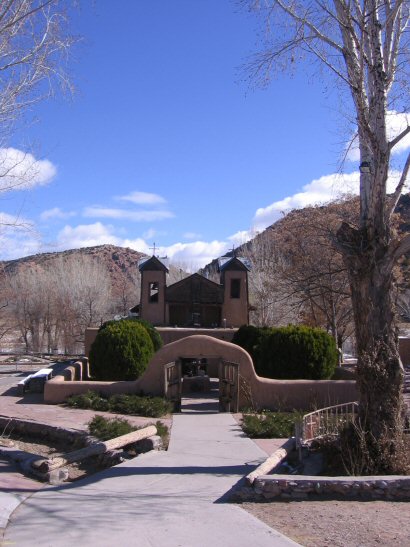 Our next stop was at a weaving shop in the same village. We had a very difficult time not walking out with a lot of fabric! Then it was on to Taos – since there was so much snow the day before, cross-country skiing, not hiking was the activity on the trails. We had lunch and bought some day of the dead fabric in Taos. 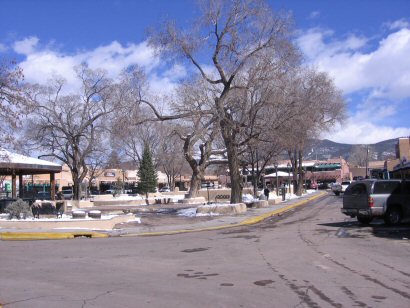 We headed back towards Santa Fe in a different direction and finally got out to hike along the Rio Grande Gorge after talking to a local. It was quiet, beautiful, and just a little desolate. We only saw one other car, and it was from Iowa!
The rest of the pictures are from that hike. 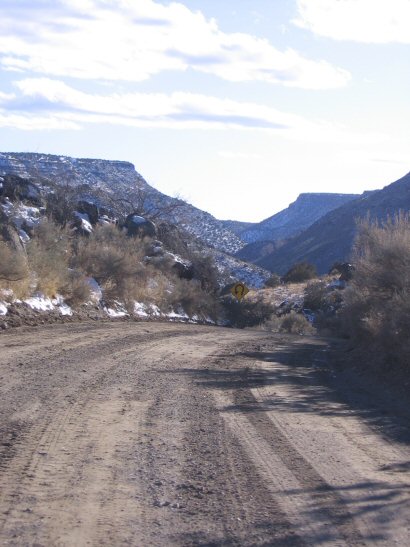 I wasn’t to sure about the road – it was a bit steep and muddy. 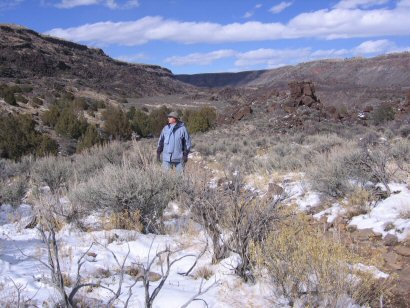 Linda along the trail. 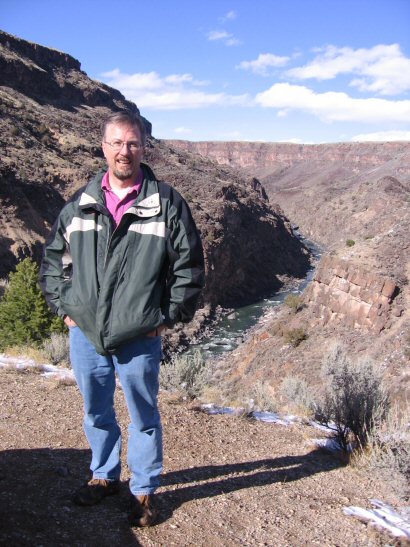 Mark at the end of the trail. 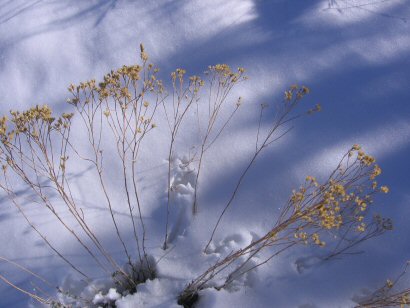 Some dried flowers along the trail. 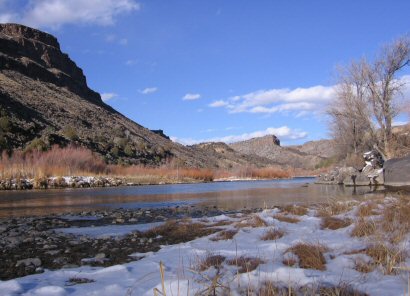 Finally a look from the bottom of the canyon at the river.
We ate dinner at the “Cowgirls Hall of Fame” where our spicy food adventures continued.

We awoke this morning to this view of our car out our window. Until we arrived, Santa Fe had received 4/100 of an inch of precipitation this year! 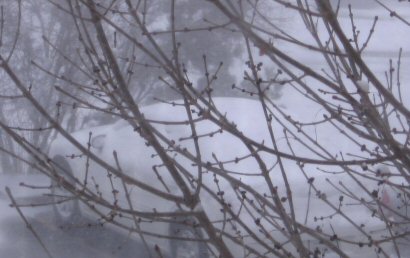 We headed downtown, oblivious to the landscape (what with it obliterated by snow). We got down to the Plaza and first order of business was to find coffee. 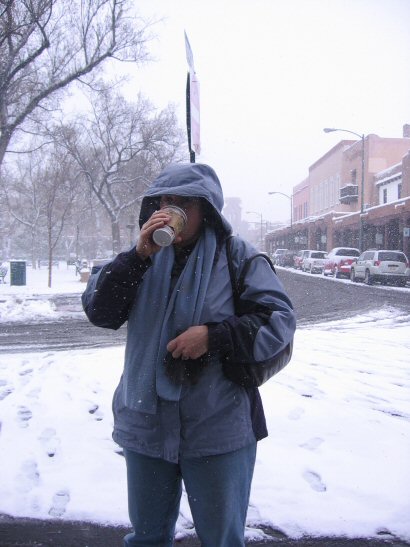 We went to the Palace of the Governors, which is the oldest public building in the U.S, built in 1610. All the museum hopping makes you hungry, so we had lunch right next to a fireplace to help warm up. 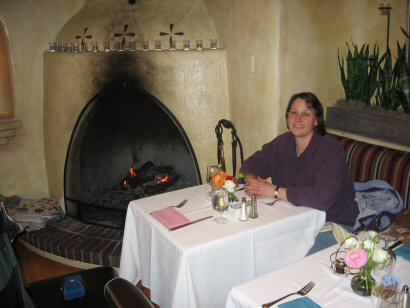 After lunch it was more museums – this shot is at Museum Hill – home of the International Museum of Folk Art and the Museum of Native American Art and Culture. 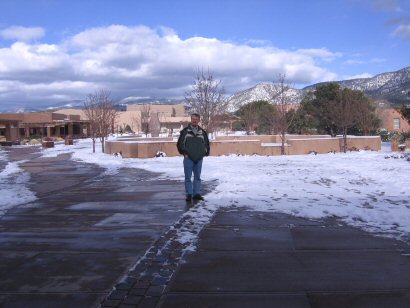 Because it was a cold and windy day, taking in the museums was a good thing.