Linda is heading back to DC in March, this time for Oxfam events held in Washington DC in recognition of International Women’s Day.

There will be conference sessions, a chance to meet with female leaders from around the globe, and a visit to Capital Hill.  Look for more in March.

When I was growing up, the only fun we had with potatoes was pushing plastic face parts into a tuber.  Things are different now. 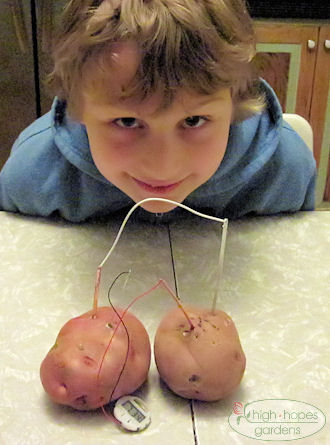 In the spirit of transparency and dialogue, I thought it best to share Knox College’s reply to my impressions following a recent visit.

Here is the response from the Dean of Admission:

Thank you so much for your evaluation. As you can imagine, colleges each make different decisions about how to allocate their resources. Some invest heavily in campus facilities and grounds. Others invest more in their faculty and the educational programs available to students, e.g. undergraduate research, self-designed studies, study abroad, etc. Although somewhat less tangible than facilities and grounds, at Knox, we have always prioritized the latter.

Nonetheless, your feedback is extremely helpful in understanding how those choices impact the impressions of families visiting our campus. We do have some maintenance issues that need to be addressed and we would be well-served by making greater investments in the appearance of our campus. Your comments underscore the importance of this.

Some of your suggestions, of course, aren’t about financial resources but about how we present ourselves, including during the campus tour. For example, despite the absence of any LEED certified buildings or wind turbines on campus, our sustainability initiatives are very extensive. This includes initiatives such as locally-sourced food for dining services, composting of food waste, retrofitting all lighting and mechanical systems, sourcing electricity from renewable sources, and much more (see www.knox.edu/sustainability to learn more and see why the Sierra Club named Knox as a “Cool School” for our efforts). Despite all that we’ve done, however, your experience suggested that our efforts were limited to recycling bins. That’s a problem. Your feedback suggests that we need to work with our staff and tour guides to better highlight our sustainability initiatives and how those efforts have permeated so much of our campus culture.

Sustainability is just one of the examples you raised. The bottom line is your feedback gives us much to consider and much to act upon. I am very appreciative of your willingness to share your impressions with us.

You present quite a quandary! I was intrigued because you were one of 40 colleges nationwide recommended in  “Colleges that Change Lives” – an intriguing book that attempted to rank colleges not on how hard it was to gain admittance, but how a college’s graduates were situated years after graduation – probably a much better measure of the success of a college. Your marketing and promotion materials were effective.

Your location offers a nice Midwestern pedigree as well – you’re celebrating your 175th anniversary this year. You’re located in a town mired in history – home of Carl Sandburg, along with world-famous brickyard, used to pave 60 miles of your town’s streets, along with streets in Paris, Bombay, and Panama City. 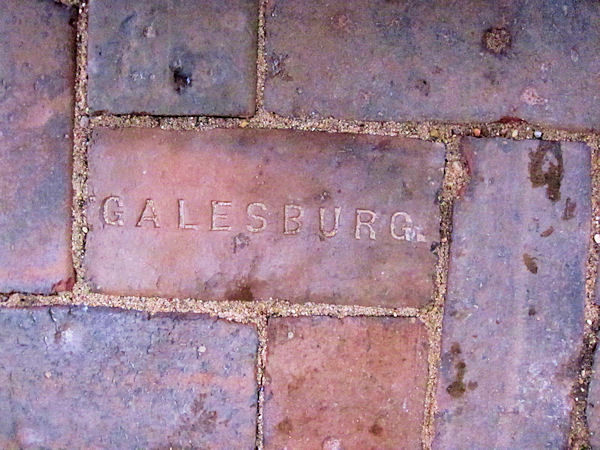 Your college has a long history of action. You were a stop on the underground railroad. It was home to the Lincoln-Douglas debates. 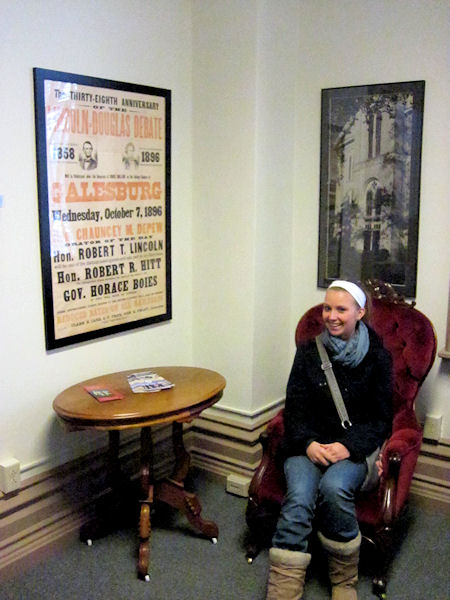 You let students on tour sit in a chair used by Mr. Lincoln.  Those are all things that seem to support your current mission.

Your Martin Luther King Day convocation was a wonderful event, complete with singing, words about the inspiration of Dr. King (and hey, thanks for the shout out to Theodore Parker, Unitarian Minister and inspiration for much of Dr. King’s thought), and words putting him in a contemporary context. I agree to think of it as a “day on” not a “day off.”

From all appearances there is a real esprit de corps among your students.  The classes my daughter attended showed the quality of your faculty.  So after all this, why am I torn in my impressions?

I was surprised at the amount of deferred maintenance that needs to be completed. I was surprised that the previous week’s snow had not been cleared from all the sidewalks; in fact from the compressed snow on the road in front of the admission office, it looked like the road was not plowed in a timely manner after the snowfall.  The strip maple flooring in the choir/band room the parents met for financial aid needed repair from termite damage. The list is no doubt very long.

I didn’t learn anything about the food service or cafeteria as the tour never went through there – we did have a lunch, but it was presented in a banquet buffet style, not of the style the students would get.  I get why, school was in session and the cafeteria probably can’t handle the excess.  But one look at the salad tells me that Bon Appetit is not your food service provider.  Hint: many of your peer institutions use them and the food is great.

I didn’t catch some of the tour – the guide didn’t have the traditional walk backwards and talk at the people taking the tour stance down. Instead she walked forward and talked, making it difficult to hear.

Unlike many of your peers, I saw virtually no signs of sustainabilty efforts – only a recycling program.  I didn’t see any LEED certified buildings, I didn’t see any college-owned solar panels or utility-sized wind turbines, or locally grown food (see Bon Appetit).  I did notice that the cost of attendance was about the same as peer institutions that did have these facilities and more.

So, here’s the corundum – can you fall madly in love with someone who keeps a messy house?  Eventually you probably can, but you take the risk of someone not hanging around long enough to find out.  I appreciated the words of your new President.  Perhaps the fresh eyes she has will lead you on a renaissance.  I had a good feeling about her. Knox seems like a grand old house that has fallen out of disrepair, but it doesn’t take much imagination to envision it remodeled into all it could be.  I don’t think my daughter will be attending, but perhaps in five years when my son is ready for his college search, the renovation will be well underway and it will be worth another look.

p.s. The Dean of Admissions was kind enough to respond to this post.  Read his comments as well.

This week was he culmination of the First Lego League season. 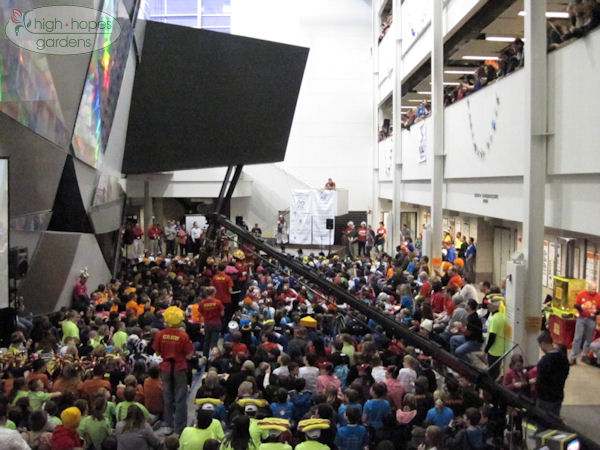 It’s a crazy scene in the atrium of Hoover Hall at the ISU College of Engineering as the 72 teams that qualified for state gather. 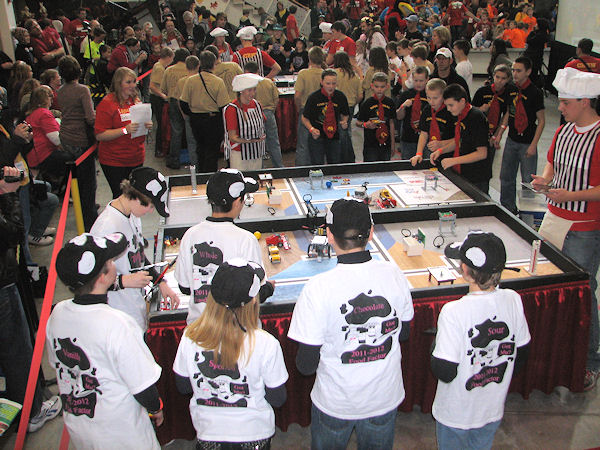 Team Mu? watching the robot on it’s mission to complete as many tasks as possible.  The other two parts of the competition, the presentation about an innovative solution and team problem-solving exercises  are just as important as the robot programming, but less camera-freindly. 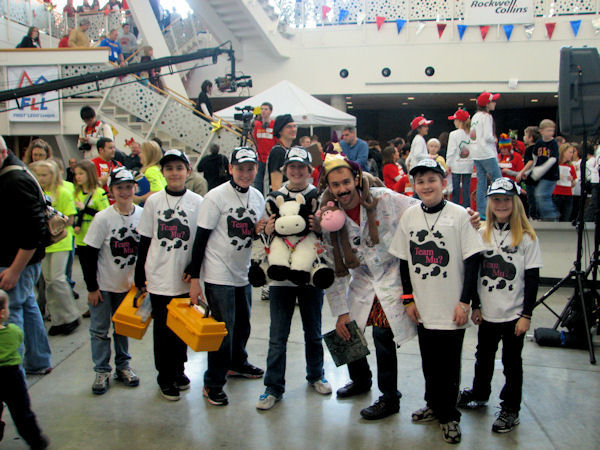 The team poses with long-time FLL supporter and Emcee Brandon. 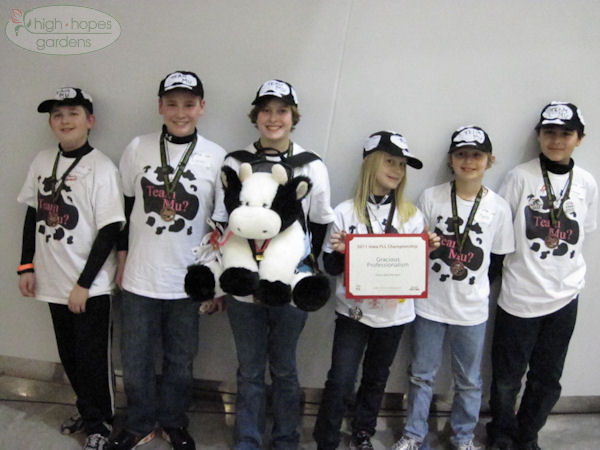 The team poses with this year’s award, third place in the State in the “Gracious Professionalism” category.  This is one of the core values to First Lego Leaugue and is described as following from FLL:

With Gracious Professionalism, fierce competition and mutual gain are not separate notions. Gracious professionals learn and compete like crazy, but treat one another with respect and kindness in the process. They avoid treating anyone like losers. No chest thumping tough talk, but no sticky-sweet platitudes either. Knowledge, competition, and empathy are comfortably blended. In the long run, Gracious Professionalism is part of pursuing a meaningful life. One can add to society and enjoy the satisfaction of knowing one has acted with integrity and sensitivity.