I do not know any of the victims of 9/11 or their families.  However, the day should not pass with out a pause and remembrance. To try to bring it home, I thought I’d just profile one, Janat Alonso. 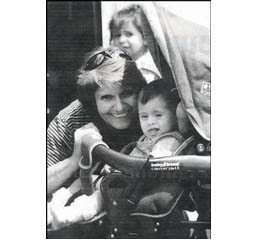 Her profile from the New York Times:

The next-to-last phone call Janet Alonso made on the morning of Sept. 11 was typical: its genesis was maternal anxiety, and its focal point was her second child, Robbie, born with Down syndrome 18 months ago. She was not only checking in with her mother-in-law, Margaret Alonso, who handled the baby-sitting during the three days each week that Janet spent as an e-mail analyst for Marsh & McLennan. She was also making sure Robbie’s foot braces, misplaced on Monday, had been located and returned to him; he finds it impossible to take his baby steps without them.

“Check his stroller,” Janet suggested. Bingo. Grandma discovered the braces. Janet and Robert Alonso were also the parents of Victoria, 2, a miracle baby of sorts. After 10 years of trying to conceive, using methods increasingly clinical, Ms. Alonso had all but surrendered her dream of becoming a mother when Victoria was conceived — surprise — the natural way. Ms. Alonso was so ecstatic she wrote her husband a letter, thanking him for this greatest gift. He was so moved he put the letter in a safe to preserve it.

Though her children were her passion, Janet was a diligent homemaker — literally. She loved painting and refinishing furniture, and spent the weekend before the disaster sanding the porch they had added to their house in Stony Point, N.Y. Her final phone call was to her husband; she told him that the office was filling with smoke and that she could not breathe. And she told him she loved him.

A profile of all the victims is at this CNN page.

one year ago…”Graphic of Obesity Epidemic”