Today, I received the first mail item that I’ve sent that came back with the “DECEASED” stamp.  There’s something so final and cold about the official post office rubber stamp announcing a death.  Death is usually communicated in person or by voice.  It’s not that it is particularly shocking that Margaret, age 93, passed away.  But even though it’s been over 25 years or so since I worked with her, and probably 10 years since I last visited with her,  it still struck me as a loss. 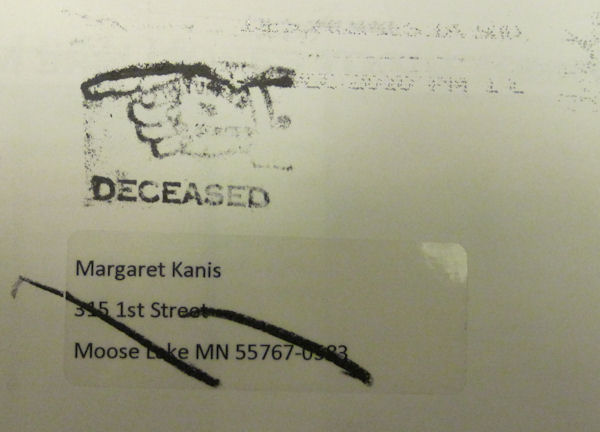 Margaret worked as a cook at YMCA Camp Miller the eight or so years I worked there.  The first few years, I didn’t pay that much attention to her, but as the years went on, and especially when I became the camp caretaker for a year when the previous caretaker suddenly passed away (during the fall and winter weekends the camp opened for retreats and such) I got to know Margaret much better.

Margaret was a robust woman, strong, and slow to anger, but certainly capable of indignation.  If the mood was right, and not too many people were around, we could coax Margaret to play the piano.  She had a roaring, raucous style.  After Margaret found out my grandfather was Polish and played the accordion as well, she really thought I was OK!

I think it also helped when one year I was the cabin counselor for one of her grandchildren who was attending camp.

One of the jaw-dropping moments at camp for me was when the strapping young teen boys assigned to help in the kitchen that week were struggling and complaining about carrying what must have been a 120 quart stainless steel vat of  “bug juice” (essentially institutional kool-aid) to the counter. Margaret couldn’t stand it any more, shooshed the two of them away (one struggling on each handle) and picked up the vat herself and carried around the room as though she was moving a pan of brownies.  Margaret was no-nonsense about many things, but when you could tickle her funny bone, she would turn red in the face and offer up a great belly laugh that meant something.  Margaret also seemed to be one of those people that lived as though she had a finite number of words they could utter during a lifetime and judiciously used them, at least until you got to know her very well.

For some reason, across the years, Margaret and I clicked and had a real fondness for each other.  I felt honored when this shy woman invited me out to her farm.  I’m not sure that more than a handful of camp staff over her 25 years or so at Camp Miller ever got that chance.  She had an absolutely gorgeous farm.  She and her husband, who died many years before she did, had a dairy farm, and she lived there many years after his death.

The farm was nestled in the woods, but had some nice, open pastures and hayfields, a charming farmhouse and beautiful barn.  She had a fondness for Collies that seemed a natural part of the farm.  And at the back of the property, a river snaked through the forest.  I’d live there in a second.

Later, after she moved to town, (and she greatly missed living on the farm) on our trips to the BWCA in far Northern Minnesota , we’d stop in and visit with her to catch up on things and show off my babies and young children.  Now, I don’t think I’ve stopped since Martin was born, but we still exchanged Christmas letters, at least up to this year- she had beautiful handwriting and always included a long note catching me up on life in Moose Lake.

This year, there was no flowing artistic handwritten letter, just my returned letter to her with a hastily stamped imprint simply saying “DECEASED.” I suppose that might have been the way Margaret might have preferred it to be  – simple and direct.