Today, we brought four lambs on the first step on the way to the freezer. 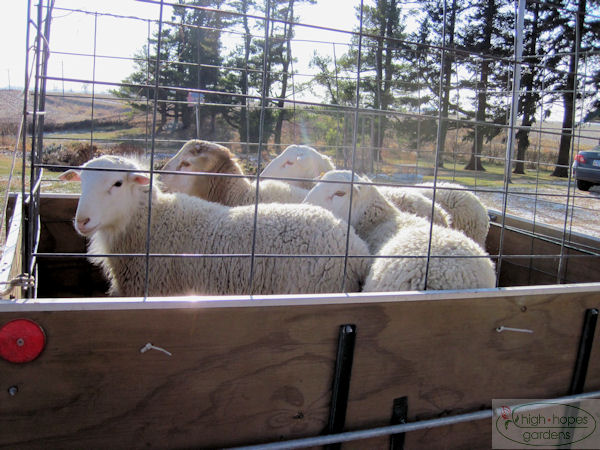 These guys and more are already have an appointment at the locker.

Emma and sheep loading don’t always get along well. Many years ago, when she was perhaps too small to help, we backed the pickup truck to the barn and posted Linda on one side of the tailgate and Emma on the other side, while I tried to move the sheep into the back of the truck. We told her that her job was to “be the wall” and prevent sheep from jumping off of the edge of the tailgate (the truck had a topper). Well, when one decided to skeedaddle out of the truck, it saw her as the path of least resistance, so as the lamb escaped under her legs, she grabbed on and held on as the sheep ran away, dragging Emma behind until we told her to let go.

During the loading experience today – don’t let the docile little faces of the sheep in the trailer fool you. Emma and I were tag-teaming one into the trailer, she had the front legs, and I on the back legs (the thought was that I would have the heavy end). Well, the sheep butted Em in the head and there’s a sudden rush of tears and vivid red blood on the dusting of white snow on the ground – just a few feet away from where the turkeys were butchered a few weeks ago. It was a bit of an unsettling feeling, to say the least. As Linda rushed over to attend to Emma on the way she said, “There goes the sheep profits” thinking Emma’s nose was all busted up and in need of an ER visit. But the story has a happy ending as no major damage was done, but once again, Emma found a way to get out of loading the rest of the sheep!