I thought I should chime in on the factory/commodity egg recall.  To our customers, the stories from the Iowa egg factories do not come as a surprise – hens in cages so small they cannot even spread their wings, piles of manure 8 feet tall leaning on the doors of the buildings, maggots crawling on the factory floor. 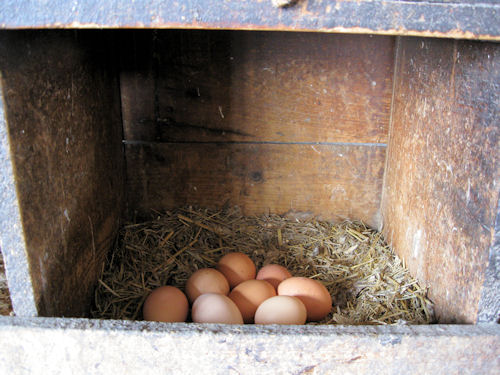 Compare this to smaller-size traditional production (see our eggs above). I know this is the way of the world, and why it only costs these mega-producers 54 cents a dozen to produce a dozen eggs.  What gets under my skin is the lack of transparency and hijacking of the images of small farms.  You know the package of eggs, with the nice red barn or pastoral scene that evokes a traditional farm image.  Like repackaged mortgage securities, there’s no way for the consumer to know the true source, since the eggs are branded under many different labels.  So as a consumer, you have no idea who’s behind the eggs – in this case – here’s a litany of documented problems with the owner of the recalled egg factories:

This is part of the price we pay for eggs that cost 54 cents a dozen to produce.

Predictably, the blame for the poisoning lies with the consumers according to industry spokespeople:

“Some people may not think of an egg as you would ground beef, but they need to start,” says Krista Eberle of the United Egg Producers’ Egg Safety Center. “It may sound harsh and I don’t mean it to sound that way. But all the responsibility cannot be placed on the farmer. Somewhere along the line consumers have to be responsible for what they put in their bodies.”

I appreciated the response of another food safety expert to this:

If consumers are being held accountable as the last line of defense in the food safety farm-to-fork line, then the egg industry needs to be explicit about it, says Carol Tucker-Foreman, an assistant secretary of agriculture under President Jimmy Carter who’s worked on food policy at Consumer Federation of America for decades.

“Should egg cartons be required to carry a message that says ‘Warning – to protect your health and the health of those in your household, you should assume that these eggs are contaminated with salmonella enteriditis and must be handled carefully in order to avoid possible illness?’ ” she asks.

At the end of the day, this presents one of the dangers of an industrial food system with hugely centralized operations – one bag egg (pun intended) can lead to the recall of a half-billion eggs.  This is not a system that has much resiliency and as former Secretary of Health Education and Welfare under President George Bush said, offers those who want to harm us a quick and easy path to contaminate the food supply – whether it be in a mega meatpacking plant or elsewhere in the system.

Kudos to Fareway Grocery and Trader Joe’s who have committed to not buying eggs from these farms ever again.