I had a chance to attend a meeting (actually I presented about wind energy) near Cedar Rapids. I arrived about a half-hour early and was curious about the recovery after the 500 year flood in 2008. I was struck at the lack of progress in recovery – still blocks of abandoned homes. 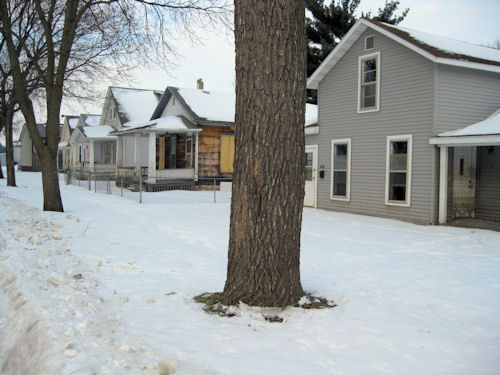 You can still see the water lines on the door in the first house. 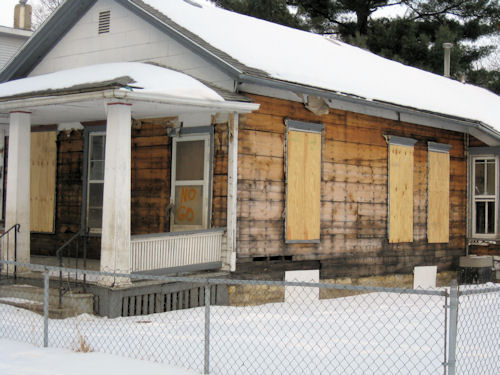 The next house down the block.  The neighborhoods were eerily quiet. No sidewalks shoveled, no cars parked in the street – quiet. I thought of all the effort that people had put into the houses in the 10 square miles that flooded – all in a zone that was never expected to flood. I thought about Katrina and the differences – although the loss of habitation in the neighborhoods is similar, residents of Cedar Rapids did not live with the fact that their homes were below sea level. I can imagine the critters and the like that have moved into these houses with broken windows, and holes in the walls.

The video above is from a web site, the Cedar Rapids Flood Story that tells of the progress and frustrations of falling out of the national news cycle.

The city is stuck with a 5.5 billion dollar repair bill, and has received about 0.3 billion in aid. All the politician’s speeches the days after the flood, were just that – photo ops.  The city now faces an unprecedented loss of tax revenue (75% of downtown businesses remain closed) as a result of homes and businesses off the tax rolls, along with a recession, and an unprecedented repair bill. People of Iowa do not need to to travel to other countries or New Orleans for mission trips as long as Cedar Rapids remains is disarray.

I’m not shy about stealing great ideas from others, so if you are looking for a cheap and easy row cover to protect your  insect-prone crops like squash and cabbage, check out Herrick Kimball.

The Whizbang Row Cover System looks like a great way to protect your crops at a reasonable price. 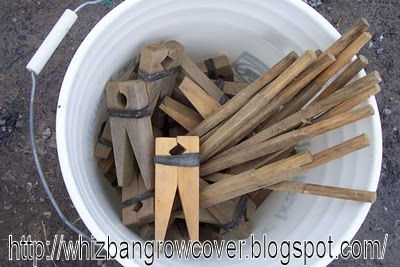 Herrick is a man after my own heart, with his ingenious, practical, and cheap ideas and plans. Just to whet your appetite, the photo above copied from his web site shows his homemade clips using old bicycle tubes and scrap wood.

I went out on a windy day to see if I could capture the sound the Skystream makes with my video camera. This is a short video of a Skystream 2.4 kw wind turbine on a 70 foot tower on a windy day. I mainly posted it to show how it sounds. You can compare it to a row of pine trees on the same property the same day. You might have to turn the sound up loud to hear it.

Since standard video cameras do not capture enough frames per second (you would need a special camera to capture the turbine spinning at 320 RPMs) the motion of the blades is not as you’d see with the blur of the naked eye.

For comparison, here’s the row of pine trees the same day.

Here’s this week’s thingamajig Thursday. This is something found in the kitchen, and not for cleaning? 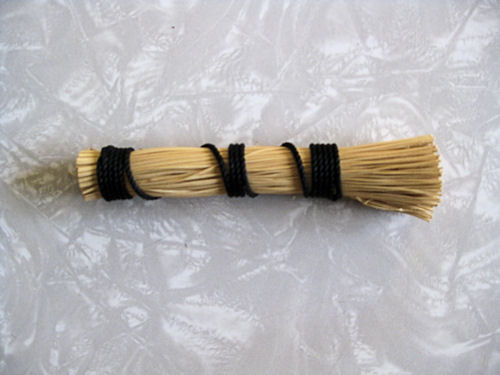 one year ago…”A Peek Behind the Curtain” 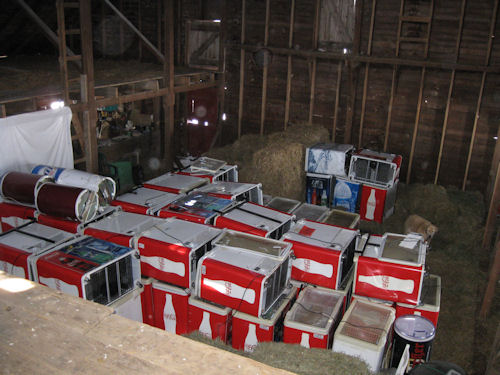 Here’s a bunch of them in the barn. OK, the joke’s over – we are NOT going into beverage distribution, but instead our barn is hosting a staging area for distribution to area farms. These were all give-aways at a distributorship in NE Iowa and are all reserved for small farms for temporary storage of farm products such as vegetables, eggs, etc.