Thursday and Friday a crew from Midwest Living magazine descended on the farm. 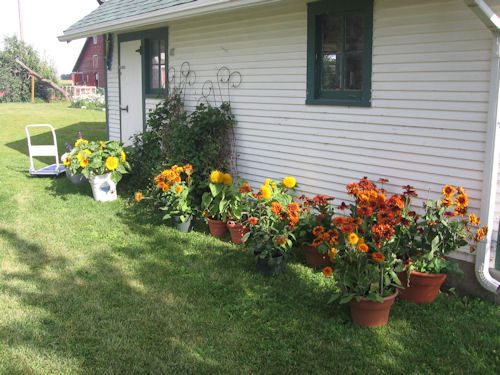 At a photo shoot like this, they leave very little to chance, including bringing their own potted sunflowers. 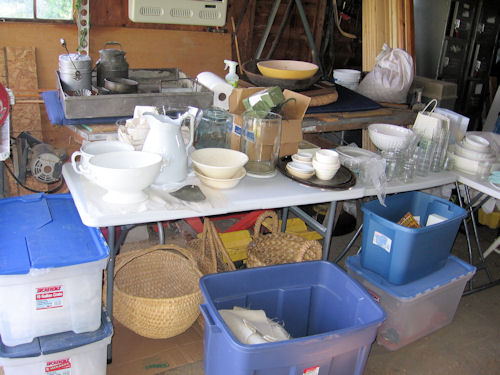 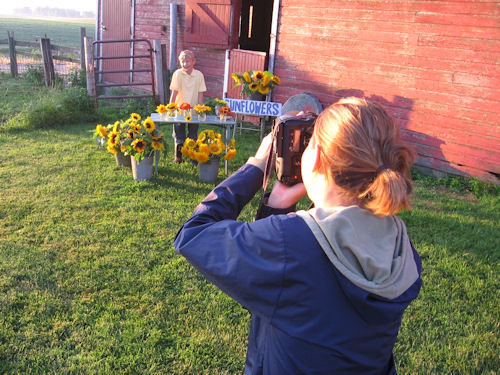 On Friday, they started at sunrise. Martin was game.  His only complaint was the rare near-record July 31 cold – he’s in a short sleeve shirt and others are wearing jackets 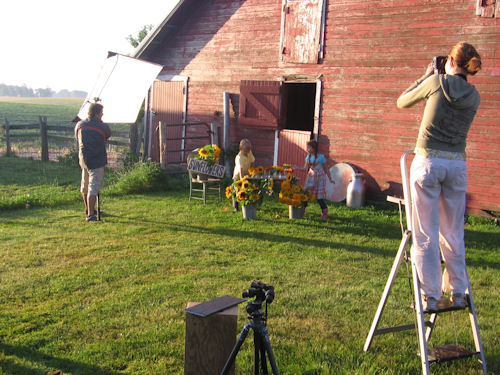 Martin was accompanied by a female model who also came in to participate in the shoot. 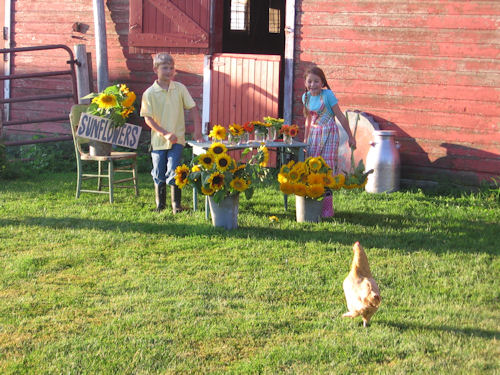 On the farm, you never know when you’ll be surprised by some animal, in this case, an early-rising hen to the delight of the kids. 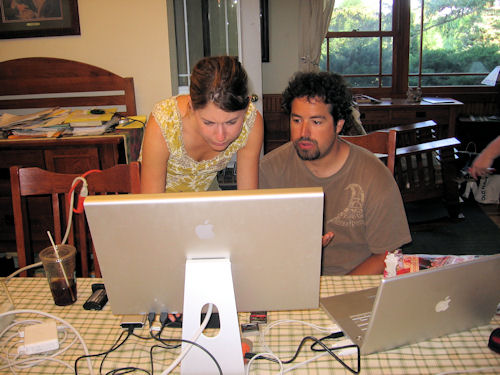 The photographers checking out the shots in the living room later in the day. 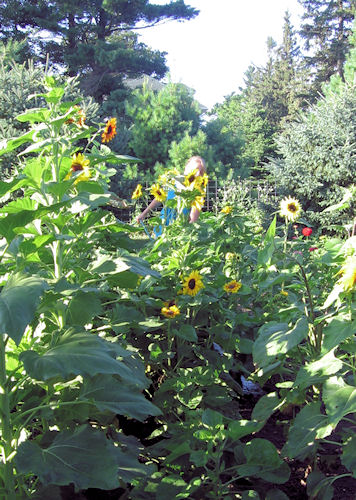 Next it was Emma’s turn.  Her job was to water the sunflowers! 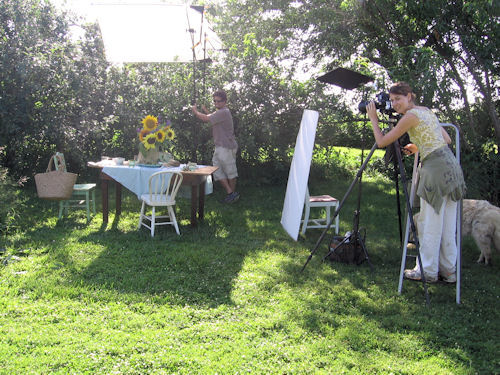 The crew setting up for another shot.  The people who came were extremely good to work with.  They worked well with the children and took wandering dogs, chickens, and the like all in stride.  Martin and Emma made money as models and high hopes did get a site fee as well.  Kudos to the Midwest Living folks for making a good shoot.  So look for us in an issue of Midwest Living next summer.

GJ, Emma, and Cousin Jill from CA took a mid-week trip to Chicago this week. 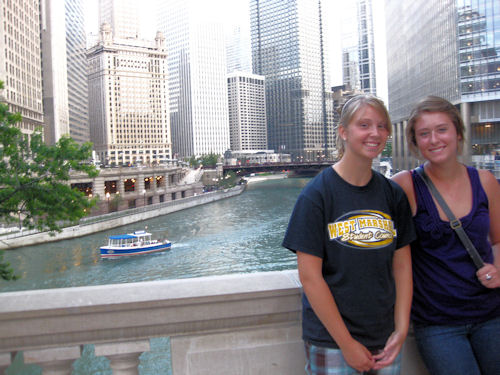 They were checking out DePaul for college for Jill, but did some sightseeing along the way.. 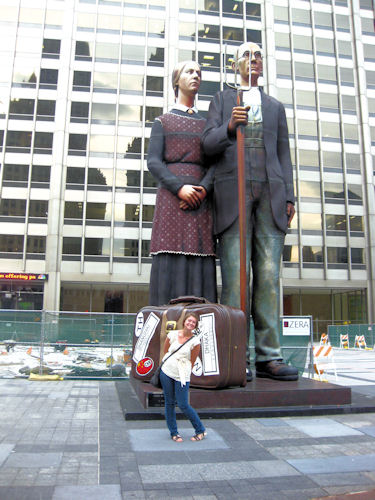 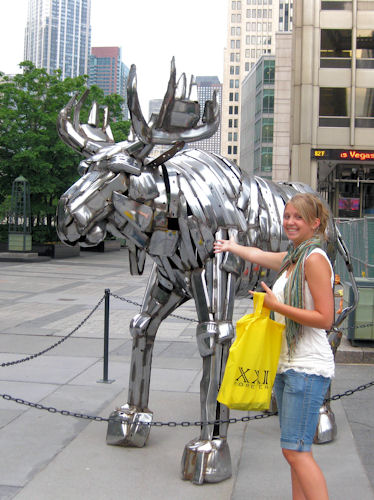 Once again, dumb luck descends upon High Hopes Gardens.  Midwest Living magazine is planning on coming out to the farm this Thursday and Friday to shoot for a story on sunflowers.  We have been sending small amounts of garden products to sell at the Des Moines Farmer’s Market.  The editors were scouting the market for unusual sunflower varieties. 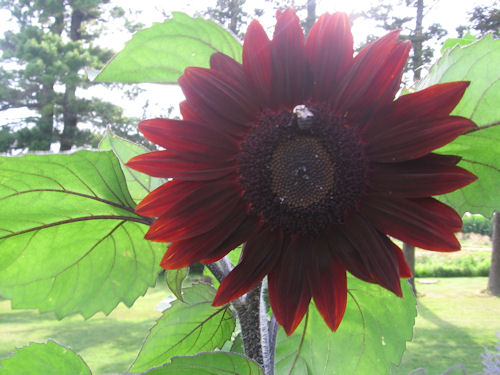 I think the Moulin Rouge caught their eye. 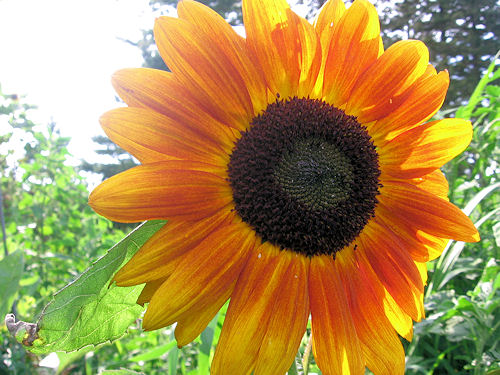 Perhaps along with the Music Box Sunflower. 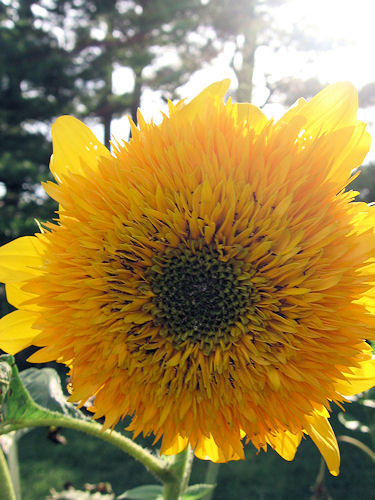 Or the Teddy Bear sunflower. 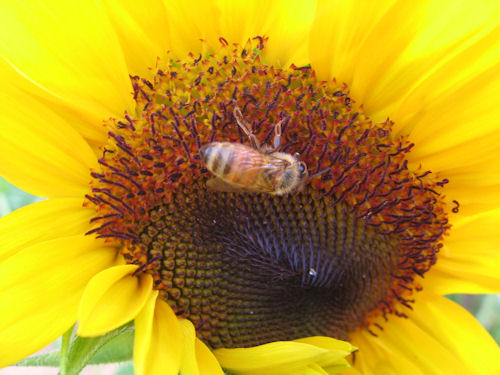 Heck, here’s a honeybee on a more standard variety.

So, they contacted us and we just kind of laughed when they asked how big our fields of sunflowers were.  Truth is, we have two or three 50-foot rows and quite a few volunteers between the rows of this year’s crops that Linda didn’t have the heart to weed out.  It’s some of those volunteers that caught the eyes of the editors.  They sent someone out to look at the farm and decided to go ahead with the photo shoot.  So, look for updates on Thursday and Friday about a magazine photo shoot.

one year ago…”Digging Potatoes and Garlic”

After the garlic is harvested, it needs to dry and cure in a warm, dry place.  The hayloft of the barn is the best place on the farm to do just that. 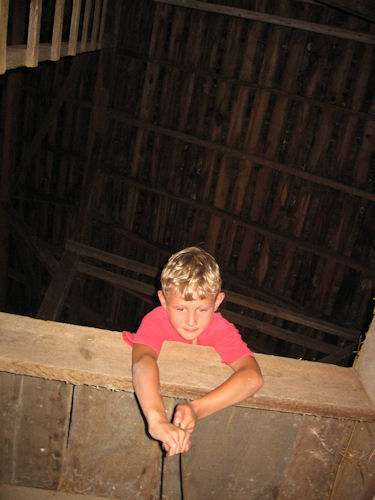 Part of the fun is getting the garlic up to the hayloft.  First, we open one of the trapdoors on the loft and send a kid to scurry up a ladder for on loft support. 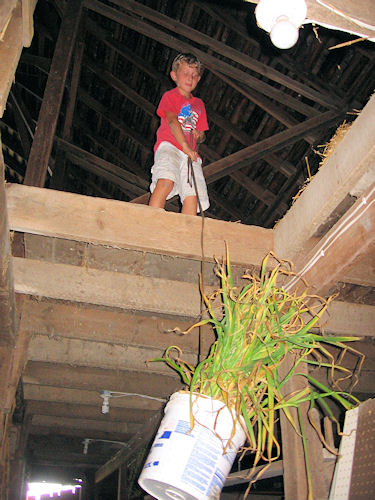 We fill buckets with garlic and hand up a rope.  Young boy pulls up the garlic. 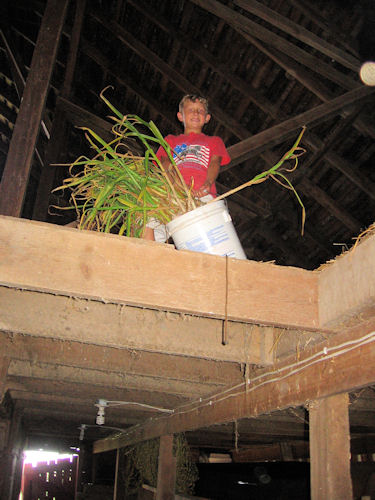 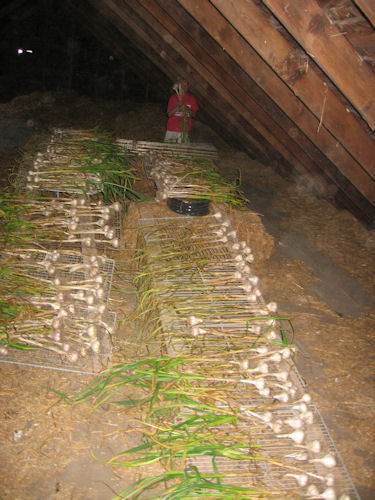 Old refrigerator racks make great drying platforms for the garlic.  After the garlic dries down, it will be cleaned and sorted for market.

The garlic harvest starts in earnest today. Garlic is a favorite crop, in part because it is planted in the fall and opens up garden space in July for a cover crop to improve the soil. 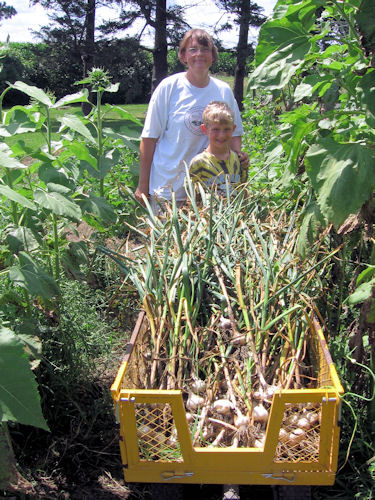 Most of this garlic is headed for Wheatsfield Grocery in Ames. 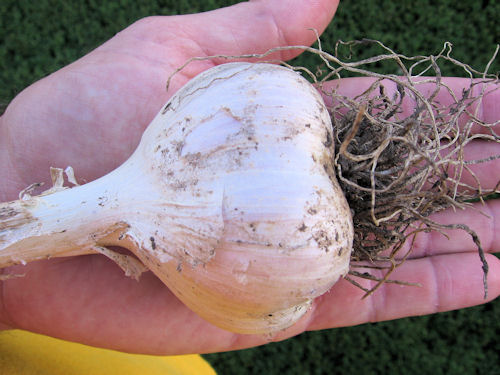 It’s been a good year for garlic as demonstrated by this bulb.

Today we attended the annual conference of the 1,000 Friends of Iowa held in Iowa City. 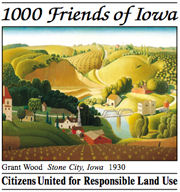 1000 Friends of Iowa promotes responsible development that 1) conserves and protects our agricultural and natural resources, 2) revitalizes our neighborhoods, towns and cities, and 3) improves the quality of life for future generations.  We learned about prospects for increased rail service and economic development around transit stations, particularly the Iowa City to Chicago and Iowa City to Omaha via Des Moines, and a corridor between Iowa City and Cedar Rapids.  In addition, we learned about the tribulations surrounding closing of neighborhood schools and building new schools out in vacant land outside of town.

Linda was asked to give the keynote address. As usual, she was well-received and invited for a couple more speaking engagements for other groups. As for myself, I made some great contacts for an upcoming project I’ll talk more about later!

We spent the night before at a farm south of Iowa City (actually closer to the birthplace of Captain James Kirk – Riverside, Iowa) with some friends who recently moved from Marshalltown.  They have a charming old farmhouse and land along the Iowa River, have planted native prairie and trees, along with lots of garden space.  It was a wonderful 25 hours away from the farm.

Today there was some magic at the farm. 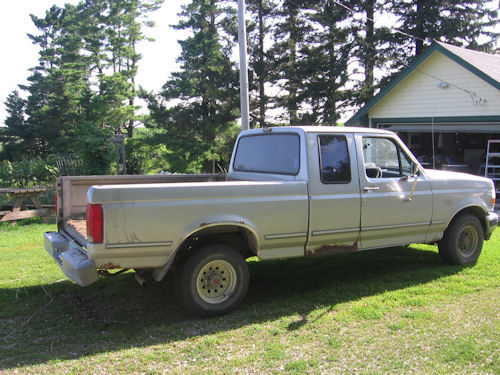 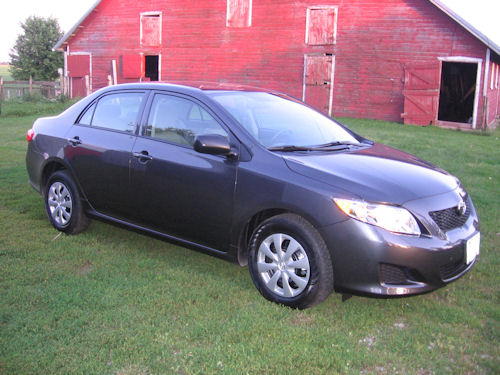 This is a milestone for me as this is the first new car I have ever purchased.  I always bought used cars and trucks and sold my cars when domestic cars hit 150,000 miles and imports hit 200,000 miles. But the fact that I could get $4500 for my old beater pickup truck worth a few hundred for a a new Corolla at 1/3 off was a deal I couldn’t resist.  To top it off, the sales tax can be deducted from this year’s taxes as well.  Best of all,Â  on the 50 mile trip home, the car pegged in at 43 mpg.

After negotiating the price over the last few weeks via e-mail by with Des Moines Toyota and other dealers, I was able to walk into the dealer, complete all the paperwork, hand over the Ford, and drive away in less than an hour.  It was also the first vehicle in about 15 years I bought in the state of Iowa and didn’t have to drive to Minnesota or Wisconsin for the best deal. 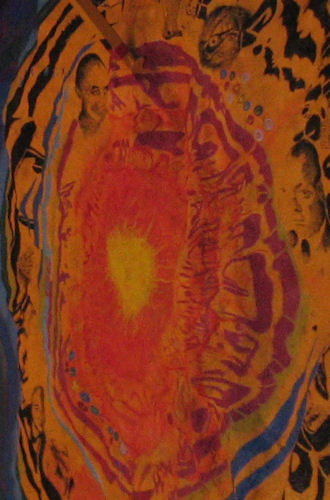 I occasionally use this blog to rant about poor products or customer service. In fairness, I thought I should rave about good experiences. 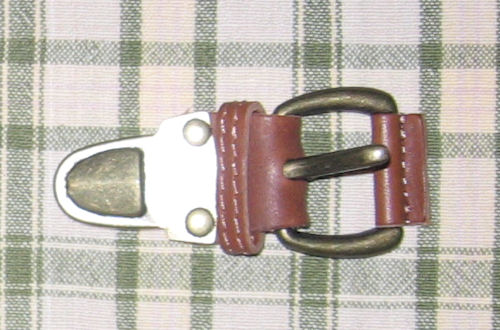 When we were in Maine, I bought a deeply discounted leather and green canvas attache case at a L.L. Bean Outlet store in Ellsworth. Now, a few months later, the one of the buckles (pictured above) was lost (my fault).

I contacted customer service asking if I could purchase a replacement – and about a week later a pair of the exact clips arrived in the mail – free of charge!

Today the turkeys arrived, just in time to mature by Thanksgiving. 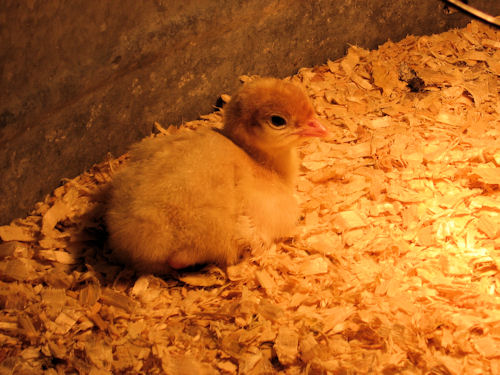 Here’s a two-day old turkey poult (baby turkey). They’ll be inside and under a heat lamp until they are strong/big enough to survive outside. 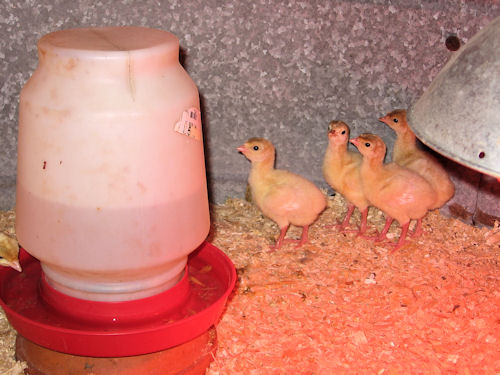 A group of poults gets used to their new home. We’re thinking of butchering our own poultry this year, after we try some chickens we’ll know if we want to attempt the turkeys!

one year ago…”Red Green Alive and Well at High Hopes”

The apple trees have set a tremendous amount of fruit this year. Today I tried to make the trees resemble apple trees more so than grapevines. In the first go-round, I probably picked a couple of 5 gallon buckets of golf-ball sized and smaller apples from four trees. 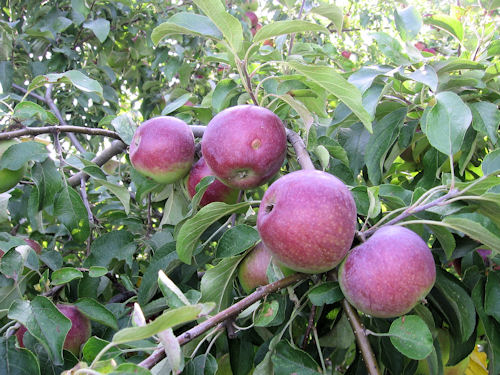 But the William’s Pride apples are further along and won’t be long before they are ready. I think they are amazingly crisp and tasty for an early apple.

one year ago…”Martin’s View of the Swamp”

After being gone for eight days, it’s amazing how “unkept” the place looks. It’s rather unnerving just how close to the edge of chaos things are without us. I wonder what it would look like after a summer of no people on the farm?

Today it’s back in the car for another 10 hour ride back home. 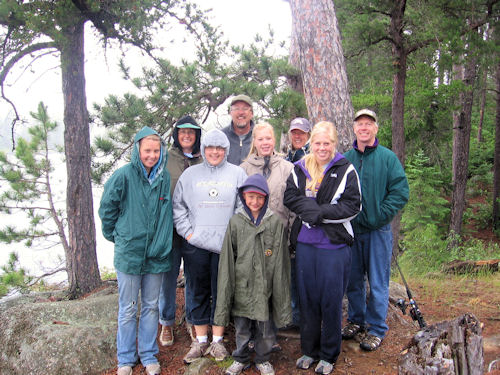 This year’s parting shot is a group shot in the rain – after all we got about 5 year’s worth of rain this week so the next few years should be great!

one year ago…”Visitors from the East”