We certainly are a couple for all lodgings – from the luxurious Dayton House one night to a rustic cabin without a bathroom or kitchen the next! 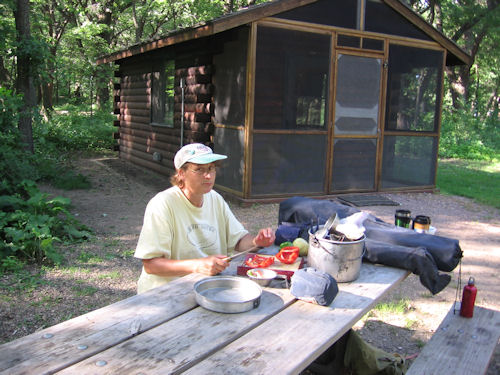 This is at Lake Shetek State Park in Southwestern MN.  Linda is getting some veggies ready to stir-fry. 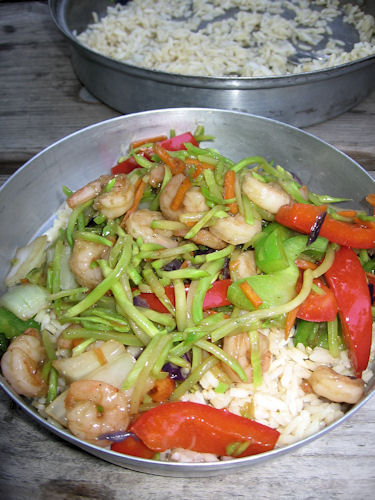 Some rice, a pack of cole-slaw mix, some peppers and onions and stir-fry mix and call it supper. 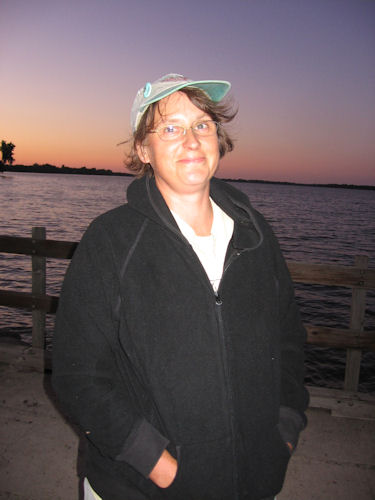 The fishing wasn’t great – while I tried hard to catch some fish, Linda opened a book, threw out a bobber and noticed her bobber was gone at one time and pulled up the only fish of the evening – aÂ  walleye.  I didn’t bring a book down to the lake, so I couldn’t emulate her technique and thus didn’t catch any.

one year ago…”Nellie the Goat”

The 20th Anniversary travel junket to SW MN continues with a stop at Blue Mounds State Park near Luverne, but nowhere near Shirley, Minnesota, although it is close to Marshall. 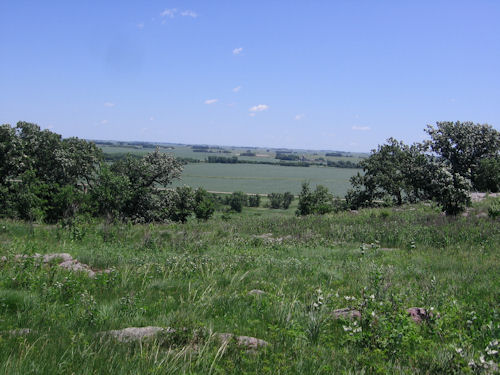 The outstanding feature of this park is the Sioux Quartzite cliffline that runs along the park.  This is the view from near the top of the cliffline looking towards the east. 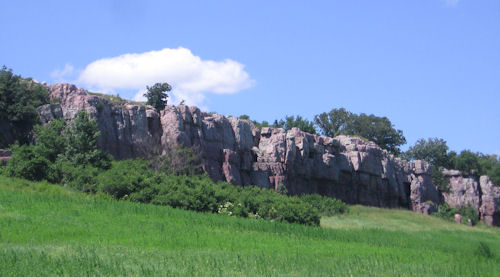 A view from the bottom of the cliffline looking west.  Again, in the middle of the flat prairies, this anomaly of billion and a half-year old rock outcrop is quite stunning to see and contemplate. 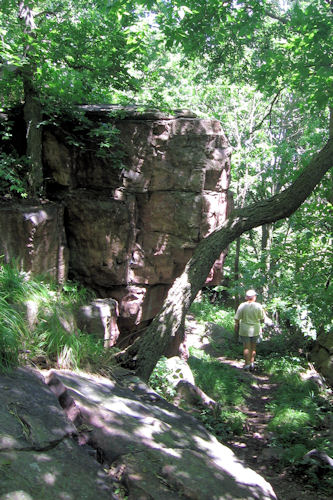 The top of the cliffline is prairie with a bison herd, but along the base is a forest of oaks on the top and other mixed hardwoods further down the cliff. 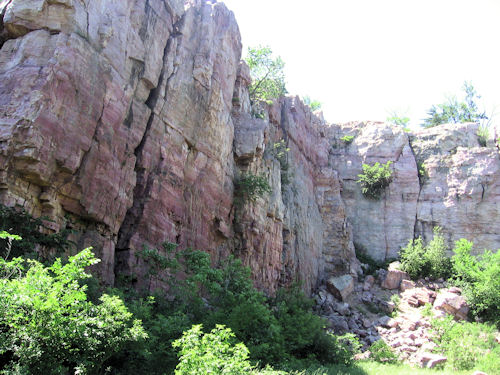 Part of the rock was used as a quarry in days gone by. 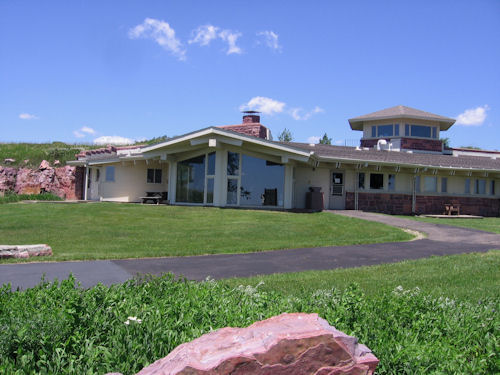 Noted author Fredrick Manfred built a house at the end of the cliffline directly into the rock.  His special room was the top where there was a commanding view of miles of prairie.  He wrote many books, and if I recall the info correctly, was nominated for Nobel prize for literature four times and gave the eulogy at the funeral of Sinclair Lewis. 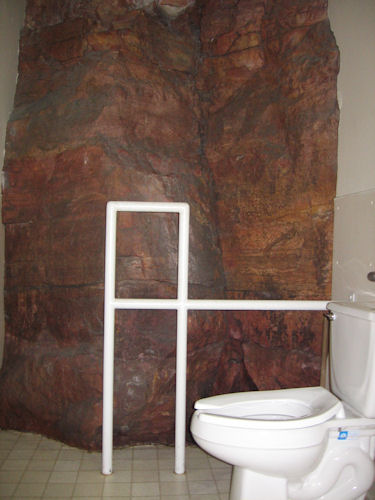 Even going to the bathroom in the house “exposed” a bit of nature.  Ultimately, the house was plagued by moisture problems from seepage from the bare rock that made up one side of the house. 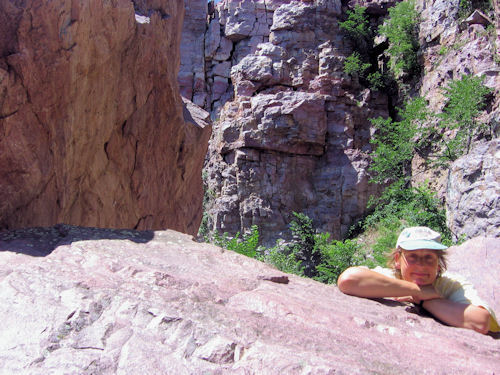 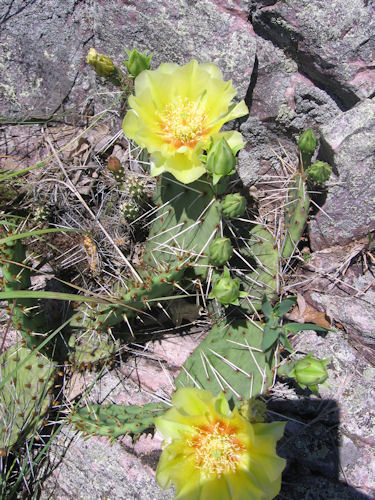 Prickly pear cactus were in bloom on the top of the cliffline. 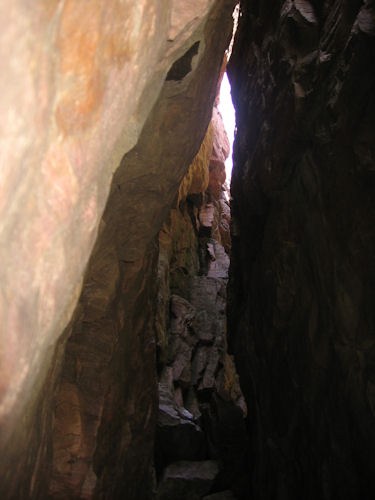 Near the bottom, all kinds of fissures in the rock make for interesting places to explore. 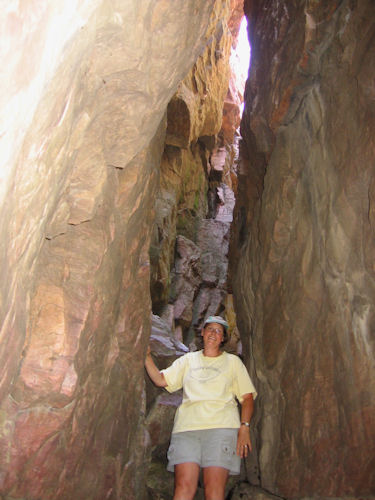 If you restrict your gaze to the red rock fissures, you might be able to imagine that it looksÂ  a bit like southern Utah and the Canyonlands country.

The second day of our 20th tour, brought us to Pipestone National Monument near, strangely enough, Pipestone, Minnesota. 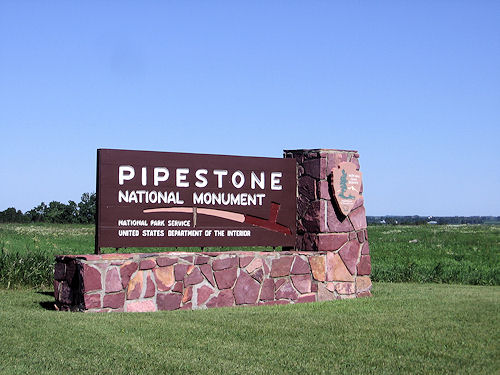 This monument interprets and protects the site of native American pipestone quarries.  Most famously it was the stone used to carve peace and ceremonial pipes. It was a sacred site and was off limits for war and available for all tribes.  They didn’t even camp on the ground when they came. 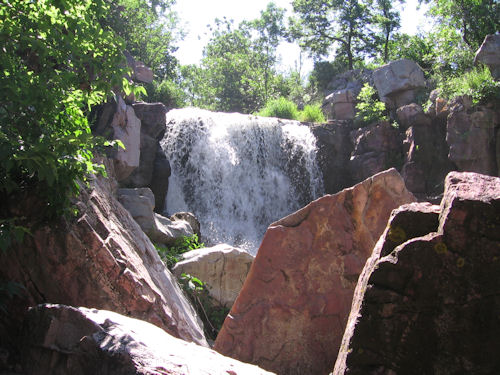 Here’s a rare shot of a waterfall in the tallgrass prairies. This is Winnewissa Falls along Pipestone Creek within the park, falling over a ledge of the Precambian (very old) Sioux Quartzite. 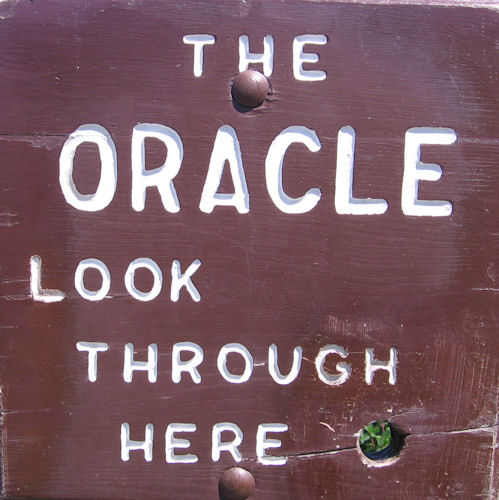 Go ahead, look through for guidance! 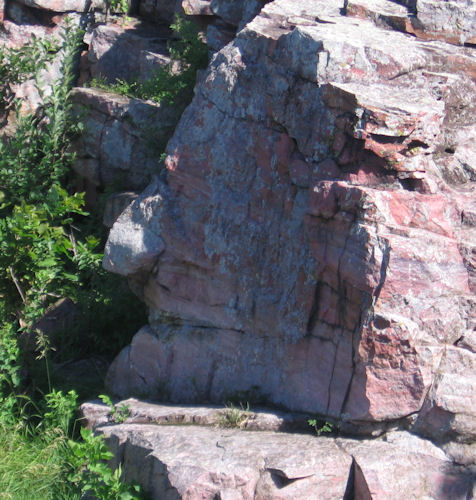 See the oracle in the rock? 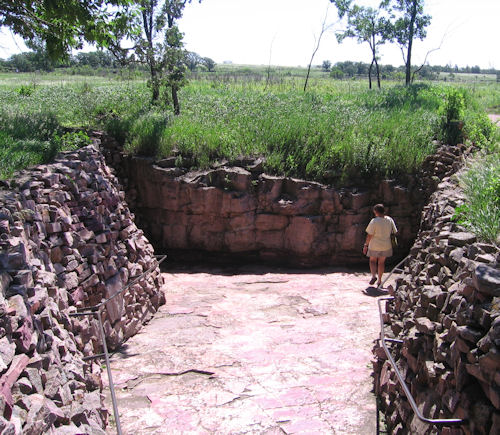 The pipestone layer is at the bottom of this small quarry – about 12 inches thick.  Native Americans still mine and craft the pipestone and by law are the only ones able to do so.

Time and $$ (see septic tank installation) prevented us from celebrating our 20th anniversary on a long trip, but we wanted to get away and note the milestone nonetheless, so we planned a trip to everyone’s favorite vacation destination, the prairies of Southwestern Minnesota! 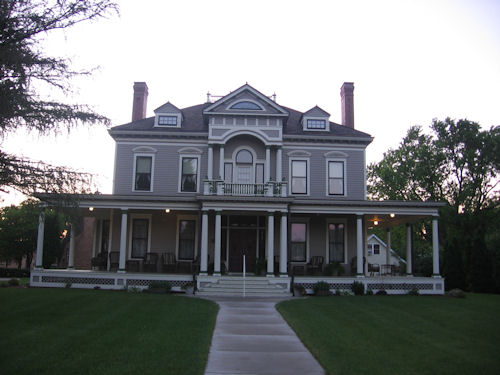 The first night, we stayed at the historic Dayton House in Worthington, Minnesota. When I booked the room, I didn’t realize it was Dayton as in Dayton-Hudson/Target. It was the family house of the Dayton family for many years before the Daytons purchased property on Nicollet Avenue in Minneapolis. 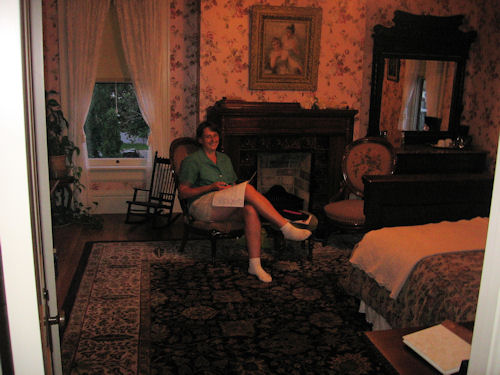 Linda lounges in one of the lovingly restored bedrooms. The house was restored as a joint venture of the community and the Dayton heirs. 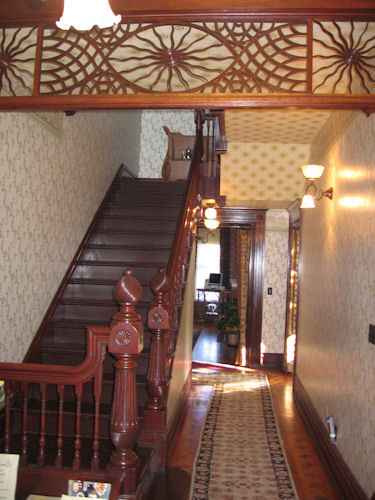 The house was a shell of its former self in 1992 when it was sold for $15,000. This staircase was walled over, which in some ways protected it. 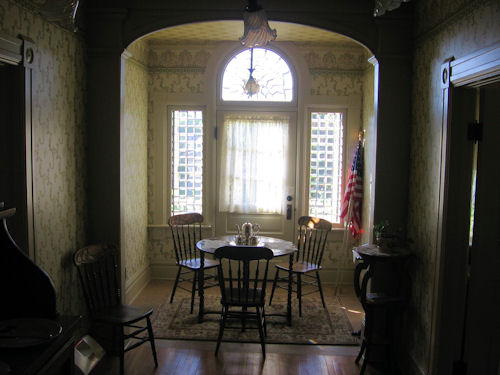 This is a small sitting area between the two suites on the top floor. Since no one else was staying at the house that night, we were offered the run of the house, including the downstairs. In addition to a bed and breakfast, the house is a great setting for showers, and piano recitals, among the furnishings a Steinway piano. 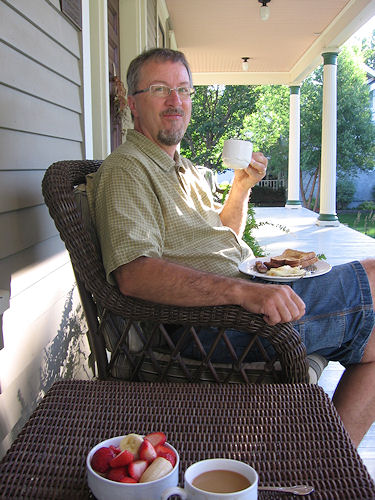 We ate breakfast on the front porch. The house was a wonderful place to stay and we highly recommend it if you are looking for a getaway in SW Minnesota. 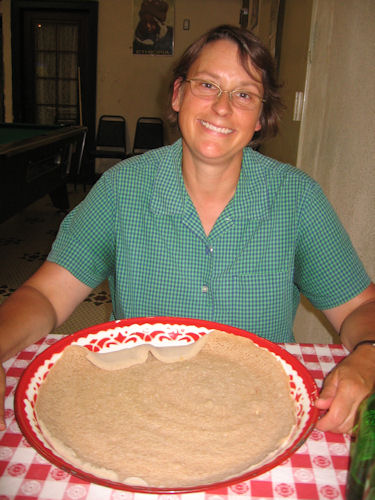 You’ll never know what you’ll find in small towns, and in Worthington, we found an Ethiopian Restaurant. As we’ve never had food prepared in that style, we jumped at the chance. We found that Ethiopian food is generally served without silverware. The base is this large bread/pancake-like circle and the food is brought in separate dishes and is served by ripping a section of the bread and wrapping the meats/beans/toppings in the bread. 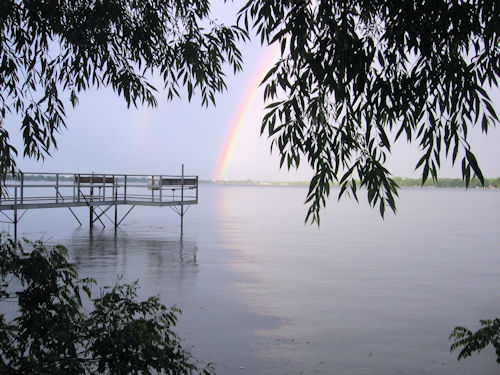 After dinner we took a walk around Lake Okabena – about a 5 mile walk. About halfway around the lake a storm rolled in and we were about three miles away from the house and were without our cell phones. We found a picnic shelter along the lake and waited out the rain before the rainbow came. A few steps back onto the road, the host at the Dayton House was driving around the lake looking for us, because we had told her we might walk around the lake after dinner. How’s that for hospitality!

Today Martin got his birthday present, a trip to the Omaha Zoo with a friend. 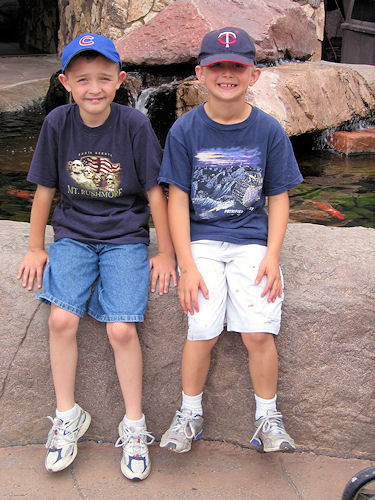 No, they didn’t call each other about what they should wear, but they look similar but different enough (Cubs and Twins hats, Mount Rushmore and Petrified Forest t-shirts). 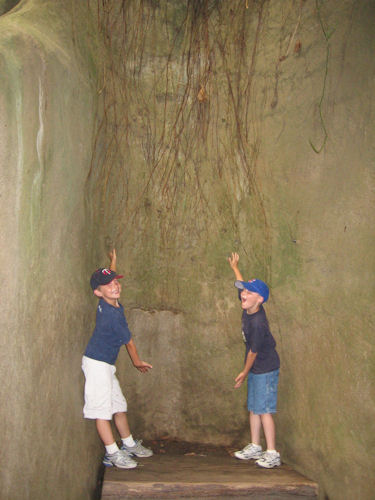 Not that seven-year old boys like to act out, but it seems like a theme for the day.

Ok, we’ll ratchet up the goofing around up another notch! 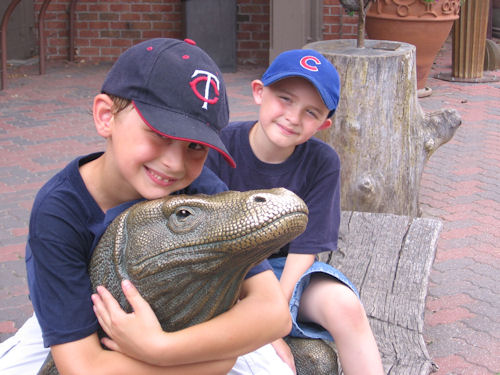 But we can be gentle as well. 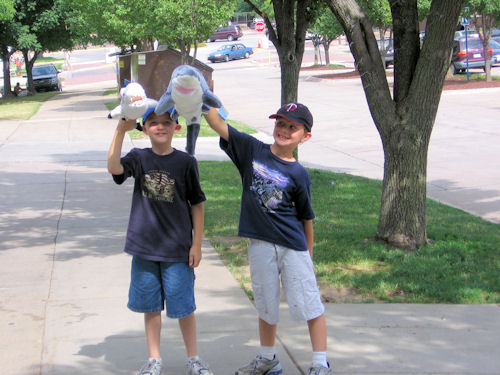 The boys after a long day at the zoo, leaving with sharks in hand.