Many years ago, I promised Claire, I’d teach her to shoot a gun safely.  I’ve either forgotten about it, been too busy, or it wasn’t the right time because of animals in the pasture, but she asked again recently and I said, “Let’s go.”Â  She was a bit surprised, so we went to the back pasture in a paddock without any animals and went over the basics. 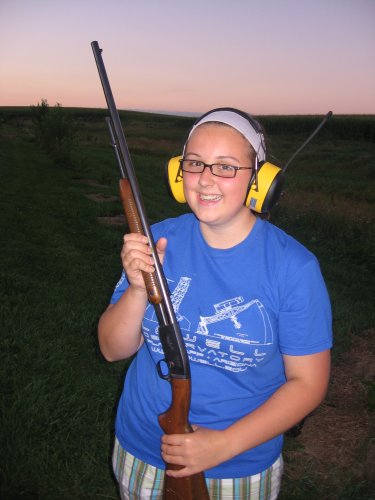 We went over the characteristics of a rifle and a shotgun and got a chance to shoot small versions of both – a .22 rifle and .410 shotgun.

I told her about how I learned to hunt.  The first year I went, I was not allowed to carry a gun, but just to watch and observe.  The second year, I was allowed to carry a gun and “practice” shooting, but wasn’t allowed to have any shells – just the empty gun.  I still remember the first time I followed a duck on the bead of the gun right in front of another hunter’s head.  It was a sobering lesson in losing track of the situation when game appears.  The third year, I was allowed limited shooting with a single-shot gun.

So today was just the introduction – we set up a milk carton on a stick and she was able to hit it with the shotgun but not the rifle.  We’ll take more target practice in the next few months to get competent.

one year ago…”Building the Hives”