I can’t let it pass without noting the death of Masanobu Fukuoka at age 95.  Fukuoka might best be described as the most pre-eminent Buddhist farmer.  He advocated an approach to agriculture which some describe as permaculture, others might call natural farming.  His most widely circulated book is The One-Straw Revolution.  It’s on my winter reading list as I’m a bit sad to announce I haven’t yet read it myself. 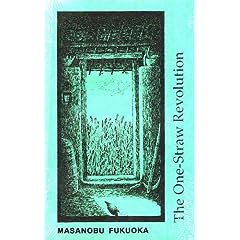 Here’s a short summary (well, not so short) of Fukuoka’s perspective on farming.

Martin, GJ, and Linda donned their beekeeper’s suits and robbed the honey.  Here Martin helps smoke out the bees before GJ takes off a super.

A beautiful frame full of honey.

The newest addition to the honey extraction process is an electric uncapping knife – it worked spendidly removing the wax tops from the frames.

Emma shows off an uncapped frame, ready for the extractor.

We use a manual extractor, just put in four frames and turn the hand crank, wait for it to stop spinning, flip the frames around and repeat the spin.

Martin’s job is to run the honey gate at the bottom of the extractor to filter the honey through a couple of filters.  It’s always a hot job as the room should be 85-95 degrees to allow the honey to flow more freely through the extraction process.

Today a film crew from the cable TV show, “Living the Country Life” descended upon high hopes gardens.  Being one of the few households in America without cable or satellite TV, I’ve never seen the show on the RFD channel. They were working on an episode featuring things acreage owners could do to be more environmentally friendly.

We’re like poster children in that regard! They didn’t want us, just our farm as a backdrop for a few segments.  Although it might seem that we have been out pounding the bushes for media attention – each one we have been asked to do out of the blue.

The Screenscape Studios trucks roll into the farm.

The first stop was the chicken/turkey waterer that is filled from a gutter on the roof.  Shh, don’t let anybody know that the day before the crew arrived, the now old stand that holds the 55 gallon barrel up collapsed after our first substantial rain in many weeks.  I was able to cobble it together in time for the filming, but it needs a rebuild after this season.

The second stop was a 1100 gallon tank that we use to collect water for the gardens/berries/trees in dry times.  It was empty two days ago, but the .60 inches of rain filled it up.

The third stop was at the compost bin.

Showing the compost raw ingredients off.

The last stop was at the wind turbine where I didn’t get a photo.  The crew was here from about 9:00-3:30 without much of a lunch break for three one and a half minute segments.  Other segments on the show filmed elsewhere include drip irrigation, organic lawn care, rotational grazing, solar energy, and a few others I don’t remember.

So all you faithful blog readers take comfort in the fact that you had the inside scoop on all these things long, long, before the TV viewers.  I’ll let you know when the show will air, probably late in the fall.

We’re in the harvest season.  Harvest brings great images, like the peaches last week, this week it’s the onion’s turn.

The onions were pulled a couple of weeks ago, sat in the sun to dry for about a week, then had their tops clipped and sat in the barn to cure for another week or so, before shuttling down to the basement.  This year I actually have a large mesh bag to store some of them in – we’ll eat the purple ones first since they don’t keep very well.