Last week when I had my camera in hand in town, I couldn’t help but stop and take a snapshot of the Marshall County Courthouse.  It truly is a landmark, taking up a city block in the middle of Marshalltown, Iowa – a town of about 25,000.  I remember a historian once remarking you could tell what was most important to a culture by observing what its biggest buildings were – the biggest buildings were once churches, then government buildings, of which this is an example, and finally buildings of commerce today. 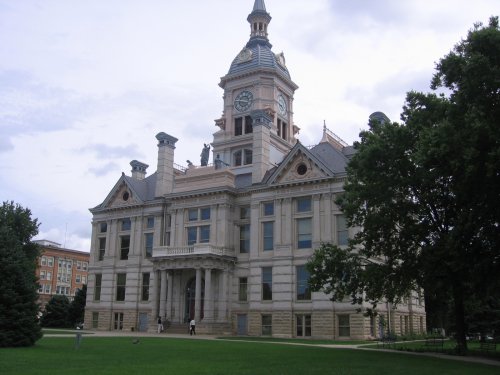 The courthouse was dedicated in 1886. It was constructed of limestone from Marshall County at a cost of $150,000. Much later, there were several attempts to replace this building with a “modern” county-city building; all of them failed (we can imagine what a “modern” 1975 building might look like today!).

The State Fire Marshall ordered the building repaired or removed in 1973. At this time the building was placed on the National Register of Historic Places. The Friends of the Courthouse Committee, a newly-formed organization, decided to save the building. A referendum barely passed to restore the courthouse, but it passed (huge thanks to those who fought to save it!). The courthouse was remodeled at a cost of $2.7 million dollars in 1975 and remains the centerpiece of the city today.