Not many days you can see a barn burn down AND hear Wendell Berry speak!  First, to the barn.  A few months ago, I wrote about a century farm (one that is honored to be owned by the same family for over 100 years) that was let slide into disrepair and intentionally burned). 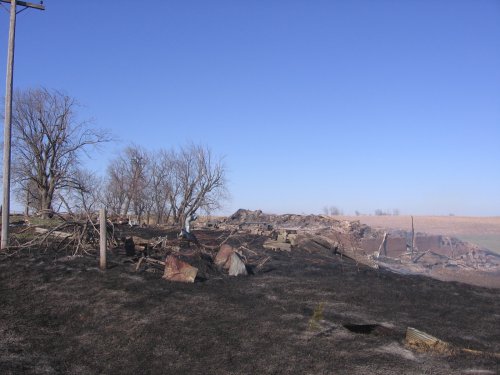 We were headed to church on Sunday morning and the smoke had just started pouring out of the barn.  Mesmerized with the size of the fire, we pulled over on the side of the road to watch (I wasn’t willing to drive back home to get the camera, some moments have to stay that way).  It was about three minutes from the time the barn was in full flame until it collapsed to the ground.  Huge vortexes of flame shot out of the door to the hay loft.  The barn wasn’t it good shape (see picture from last winter), but it is sad to see another barn go.  It is way too common.  Our skyline changes once again.

That night, about seven hours later, we were driving back to Ames to see Wendell Berry and something had re-ignited the ditch near the barn and the fire was heading south quickly – the fire trucks arrived as we were driving down the road to survey the fire and whether anything was in its path to stop it.  Now we have a complex – our 2 now-famous fires (two different trips) where places we were just at/just arriving burned in Texas – and now, happening across the height of two different fires in the same place, the same day, hours apart.

In case you haven’t seen it, Sugar Creek Farm has a post and incredible photos of an old barn burning down.

In the evening we went to see Wendell Berry, an author, poet, social critic, and farmer whose work I have long admired.  He appeared at Iowa State in the Great Hall.  In an attempt to make the evening more intimate, it was set up like a talk show – with other speakers besides Wendell on stage to make conversation.  Unfortunately, the sound system sounded and acted like it was purchased second-hand from a McDonald’s drive-thru, so I wasn’t really sure what all he said – there was an overflow crowd as well.

When they opened it up to questions from the audience, again, unfortunately, there were questions that didn’t elucidate elaboration, or worse yet, just plain ramblings by people using the microphone to introduce the audience to their web site and pet peeve.  All in all, it was an unsatisfying event that held so much promise to be good.  I’ll have to read his latest book to make up for it.