We had a splendid dinner tonight. 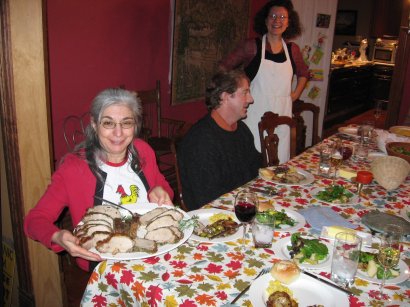 Wende and Joe from Wholesome Harvest hosted a dinner with Katherine DiMatteo, keynote speaker for the Iowa Organic Conference and head of the Organic Trade Association (she’s holding the pork). We were also able to give Katherine a tour of our farm. Next to her is Robert Karp, director of Practical Farmers of Iowa, and Wende. 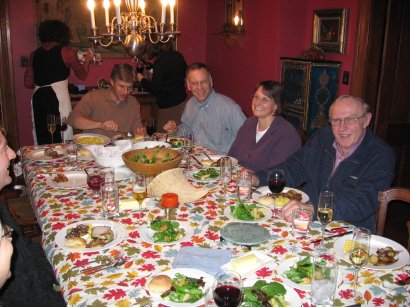 Fred Kirschenmann, now Distinguished Fellow and former director of the Leopold Center along with Linda and Mike and Joe from Wholesome Harvest.

It was an evening of transition for many of the people there – Fred being forced to resign from director of the Leopold Center, Robert in the process of leaving PFI to his next adventure, Katherine leaving the OTA, and even myself, leaving the board of Wholesome Harvest at the end of this year. As usual, we attempted to solve many of the world’s problems, but since many of us have been working on those problems for decades, we didn’t come away with all of them solved, but we were able to share some good ideas with each other for some new food for thought. And of course, the food was tremendous.