It’s not often that one of the Beatles stops in Iowa to play a song or two, but tonight Paul McCartney was in town and we brought the girls. It must be hard to select just 2 1/2 hours of songs from the Beatles/Wings library. A good time was had by all. What struck me is how many of the songs are just a part of everyday life and how the ladies must still go nuts for those puppy-dog eyes! 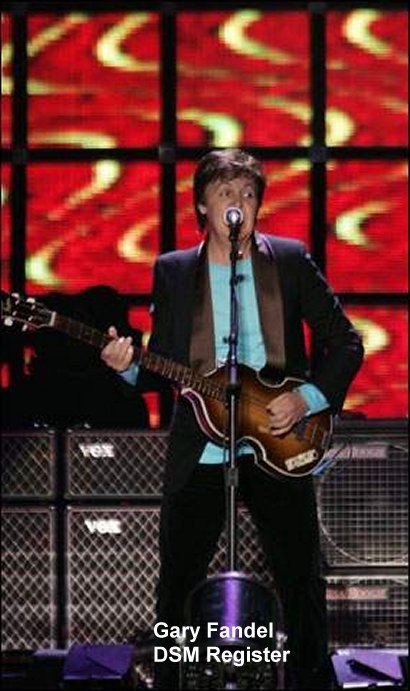 I still remember (for no good real reason) as a college student driving from a lake in Northern Wisconsin late at night with two guys (let’s call them “Mike” and “Tommy”) and for some reason we had the tape recorder on taping a variety show of sorts while we traveled. For some reason that made sense at the time, there is a particular painful version of “Hey Jude” with the three of the harmonally-challenged guys singing along. If I recall, the playback revealed the “na-na-nas” were particularly painful. I’ll have you all know that singing along 20 years later with 18,000 or more people, the “na-na-nas” sounded much better with my mature voice!

As far as a concert experience, the songs were all played pretty true to the originals – to my ears, the later Beatles and Wings songs (Band in the Run, Jet, Sgt Pepper’s Lonely Hearts Club Band) lent themselves much better to the stage than the earlier Beatles tunes. “Let it Be” and “Maybe I’m Amazed” worked well as stripped-down versions. I would have preferred more improvisation and letting the two young guitarists loose, but nonetheless, it was a show to remember.