This is one of those well-meaning projects that drags on and on. Last year we thought it would be great to get Martin a playground with a swing, slide, tower, and monkey bars. So last June 30, he got the playground in a box – a stretch for a 2 year old to make the jump from the box of hardware and lumber to a playground. Picking up the lumber was the most weight the truck ever hauled – I was worried something would break the whole way home. We got some of the pieces together fairly quickly – it was the landing pad that took forever – it was neither fun nor ever a top priority to dig out a 20×30 area six inches deep to place the wood chips (I’ve come to learn to make things at ground level, rather than build up).

At any rate, it was about 3/4 dug out by the time the ground froze last winter and this spring is a big gardening and planting time, but I want to have it up by his birthday THIS YEAR. So a burst of digging this weekend and the better part of a day today got the landscape fabric spread, wooden border put in, and wood chips spread. We built most of the tower today. 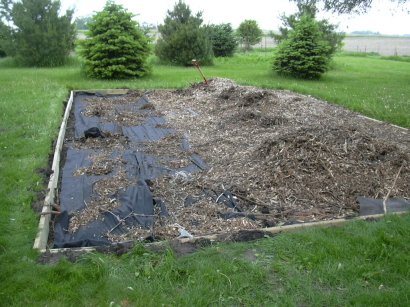 We were in a bit of a quandary trying to tip the tower up with only dad and Martin. We gambled and won that we could pull it up with the tractor and a chain (the possibilities were the tower would just drag on the ground and not lift up, the tower would lift up and promptly keep going to tip back the other way). The good outcome happened, it lifted and did not tip toward us from the momentum of tipping up. Martin spent most of the day with me, fetching screws, talking non-stop, and asking for the slide to be put up. He seems genuinely excited and must sense it is finally coming together. 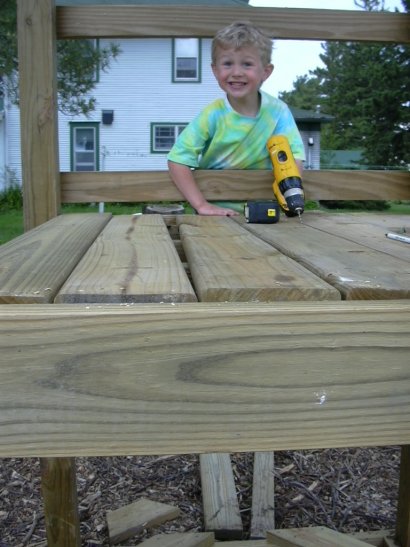